Bob Staake is well-known as both author and illustrator of such inventive works as Look! A Book!, Look! Another Book!, and The New York Times “Best Illustrated Children’s Book of the Year” selection,  The Red Lemon (2006).  He has illustrated works by Dennis Shealy, Peter Stein, and Diane Muldrow, some under the Golden Books imprint.  Readers unfamiliar with contemporary children’s books (too bad!) may recognize his witty and politically committed New Yorker magazine covers.

In his latest book for children, The Book of Gold, Staake has penned a memorable fable about Isaac Gutenberg, a little boy whose mentors include a wise antique shop owner and the lions guarding the New York Public Library.

These role models challenge his boredom and cynicism. The child who had responded to his mother’s excited question about the width of the eye on the Statue of Liberty with a typical, “Does it matter?” is transformed into a zealous pursuer of knowledge.  At the book’s end, Isaac has aged to a man of eighty, with the same small stature and round glasses, but bent over and walking cheerfully, aided by a cane.  Children may be intrigued, and parents gratified, by the fact that this little old man is the same person, only now committed to passing on his love of books to others.

Staake’s characters seem cartoon-inspired, with round or elongated heads sitting on rectangular bodies. His characteristic bright colors and allusions to mid-century (20th century?) illustration style cannot be reduced to imitation. As in the work of Richard Scarry, they are components of a complete Staake world identifiable by humor and irony.  In The Book of Gold, the irony is less present, as Staake has constructed a rather traditional narrative about the value of reading.  He alternates full-color pictures with 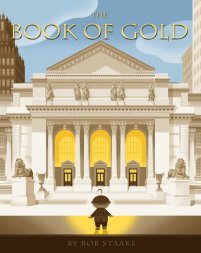 sepia toned ones, recreating on some pages a New York of the 1930s, with the Brooklyn Bridge, the library on 42nd Street and Fifth Avenue, and Central Park.  Staake also depicts scenes from an imaginary world tour, as Isaac seeks Egyptian tombs and Russian onion-domes, all possible locations of the secret alchemy that will turn books to gold.

When I first read the book, I was intrigued by what seemed to me an obvious clue to Isaac Gutenberg’s background.  Isaac’s parents bring him from Brooklyn to visit Manhattan in 1935.  The shop where Isaac’s search begins is “Goldberg’s Antiques,” where they have gone to find a gift for Isaac’s Aunt Sadie.  The building next door to the shop houses both a delicatessen and, above it, “Haberdasher & Mensch,” presumably a men’s clothing emporium owned by, well, a  mentsch (Yiddish term for a human being, e.g. a decent person).  I was so struck by these suggestions in the book that I contacted Mr. Staake, who very kindly responded.  He answered my question about Isaac’s possible connection to Jewish American history by explaining simply that Isaac’s last name was an homage to the inventor of the printing press and that Goldberg’s antique store was chosen for its consistency with Isaac’s search for the book of gold.  He added that, if the details I mentioned causes readers to ask, he is happy with that coincidence. Mr. Staake’s answer reminded me of Charlie Chaplin’s alleged but unproved reply when asked if he was Jewish, “I do not have that honor.” The book’s illustrations offer other connections to readers in realistic images of an inclusive New York City, where a Sikh gentleman drives a cab, an interracial couple of two men push a baby in a carriage, and people of all ages and backgrounds interact in the grand setting of the New York Public Library.

Whatever holiday you are celebrating this year, or if you are just looking for an opportunity to present a child with a meaningful gift, The Book of Gold will not disappoint.  It will confirm what Isaac Gutenberg learns: “…he couldn’t believe how much had changed – while other things remained the same.”