This is a ballet book not only about beautiful fairies and exotic costumes. It is not even only about toe shoes and the fanatic discipline they require.  Swan presents to young readers the fantastically but ultimately tragic life of Russian ballerina Anna Pavlova (1881-1931). 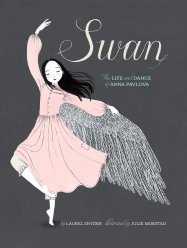 Laurel Snyder’s simple but evocative language encourages readers to identify with Pavlova’s progress as the daughter of a poor laundress who becomes a world-famous icon of classical ballet.

(In a fascinating blog about the Jewish origins of ballerinas, children’s book author Yona Zeldis McDonough reports that Pavlova, whose parents were not married, may have been the daughter of a Jewish businessman and philanthropist.)

As a young girl, Anna Pavlova is trapped in the monotony of menial work:

The talented Julie Morstad (about whom I have blogged before) depicts Anna as a Cinderella-like figure dancing with a broom in front of her apartment window against a background of laundry hanging on a line.

Visits to the ballet in a horse-drawn sleigh through snowy St. Petersburg streets become scenes of Anna’s own dance lessons. Only in the afterward does Snyder explain Anna’s acceptance at the Imperial Ballet School and the beginning of her professional training.  The story itself is not interrupted with this detail, allowing it to develop in a dream-like way, but with many realistic touches that ground Anna’s life in the world.

Two pages depict her early training as a combination of tasks. She sits on the floor next to a pincushion and sews her toe shoes. Later she is coached by a woman teacher in a brown dress and flowered shawl who touches Anna’s arm and raises it to the correct position. Later in the sequence, her progress is reflected as a male ballet master merely raises a cane over her head as her arms mimic its angle.  In between these two pictures of instruction, Anna pirouettes and pliés in a gauzy sea glass green dress.  As in her other books, (link to two earlier blogs) Morstad clothes delicate and detailed scenes with carefully chosen centers of contrasting color. Pavlova dances in a white tutu while holding a bouquet of red roses, and wears gold disc earrings as an Egyptian princess.  The scenes leading to the dancer’s early death are different.  A chilled and unwell Pavlova stands “without her boots and mittens” in a green background with green and earth-brown suitcases.  She dies under in a white bedclothes surrounded by very pale pink and grey flowers.

If the book sounds highly dramatized, even lugubrious in its imagery, remember that it is about Romantic ballets where swans die and lovers are sometimes doomed.

The inspiration of the story lies in Pavlova’s determination to live through her art: “When people throw flowers, Anna tosses them back./It’s enough just to dance.”

2 thoughts on “Not the Nutcracker”