There was a snowstorm here today, and while Peter, of Ezra Jack Keats’ The Snowy Day, seems the best representation of a child’s elated experience of the snow (recently featured in stamps from the U.S. Post Office), I decided instead to write about mice.  Mice Skating is an optimistic poetic journey with Lucy, a brave and persistent girl mouse who is undaunted by rough weather or practically anything else.  Her wool hat gives her the courage to face winter while her friends huddle inside like, well, scared little mice.

Not content with enjoying the snow alone, she tries to convince Marcello, even though he replies that he won’t leave their dwelling: “Not unless that snow/is made of mozzarella.”  Lucy is not dissuaded by this lack of enthusiasm: “She fashioned skates out of pine needles/and scurried to the pond.” Mice Skating writer Annie Silvestro’s Bunny’s Book Club offers a complementary indoor view of bravery, with a brave bunny who loves to read seeking entrance to a library at night.

Meanwhile, Teagan White’s pictures portray all the mice, whether bold or anxious, sympathetically.  Using earth tones of brown, grey, and green, along with bright touches of pink which unapologetically identify Lucy’s gender, she creates a world of classic anthropomorphized animals with a modern twist.  Ultimately her friends learn from her fortitude and join her.  (In an added coincidence, White’s new book, released January 2 of this year, is Snow Sisters, written by Kerri Kokias. It introduces two sisters whose attitudes towards winter weather are as different as those of Lucy and her companions. ) 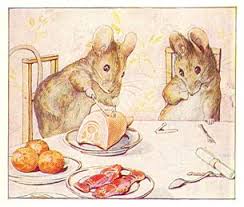 Mice Skating, especially the pictures, brought to mind Beatrix Potters’s The Tale of Two Bad Mice. I am sure that Silvestro and White would be honored to be in Potter’s company.  Tom Thumb and Hunca Munca, the naughty mice in Potter’s story, really have earned an unfair reputation. How “bad” are they to want a nice home, especially as they have a baby badly in need of a dollhouse cradle?  As for their infamous temper tantrum, their rage seems justifiable when the fish, pudding, and oranges in their new home turn out to be plaster and the fireplace is lit up with nothing but red paper. Even the coffee is “nothing…except red and blue beads.”  So although they are not as adaptable as Silvestro and White’s characters, their stubborn insistence on achieving a goal seems to make them forerunners of Lucy and her friends.