How old does a child have to be for you to tell her about Emily Dickinson?  There is a kind of fairy-tale element, unfortunately, of presenting her unusual and somewhat solitary life, but that is not the essence of what you want her to know. 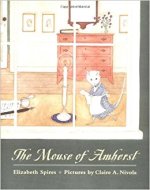 Three very different books each include the poet’s insistence on independence and nonconformity, but they all succeed in conveying the phenomenal power of her creativity, which is the main part of Dickinson’s life of interest to us all.

Emily adopts the perspective of a child, a neighbor of Dickinson who develops a relationship with her in spite of the prejudices of the community:

“There is a woman on our street they call the myth…If strangers come to call she runs and hides
herself away. Some people say she’s crazy.
But to me she’s Emily…”

The book does preserve the image of Dickinson as a strange and mysterious figure who speaks in cryptic language, even to a child.  Recent biographies have suggested that she had more interactions with others and was not as isolated as her popular image would suggest.  In her brief conversations with the little girl, Bedard, who researched Dickinson’s life and spent time in Amherst, manages to impart to grade school readers of picture books a sense of respect for Dickinson’s genius. When the girl asks her, looking at a sheet of paper Dickinson is holding, “Is that poetry,” the poet responds, “No, you are poetry. This only tries to be.”  While Winter’s and Spires’ books about the poet incorporate her verse, this book includes only one poem.  It is not an entry point for teaching about the poet’s work, nor is it a picture book biography. This is more a book for older picture book readers who will identify with the story of a woman who is insistently different, and of the child who learns that such people can be admirable and their friendship rewarding: “Perhaps the lady in the yellow house is also afraid…But why – you cannot say.  Maybe people are a mystery, too, sometimes.”

The illustrations by Barbara Cooney are eloquent and beautiful portrayals of 19th century New England, with realistic details, but also the sense of unresolved mystery that is characteristic of her work.  One stunning image is divided into contrasting halves, one picturing the girl’s parents discussing the mother’s visits to the Dickinson home, the other showing the little girl as she listens to them.  She is seated near the top of a dark red-carpeted staircase and is wearing a white nightgown, much like the poet’s habitual dress. Her hands are quietly folded and her face is expressionless.  Her parents’ conversation takes place in the adult world, accompanied by the objects missing from the girl’s empty staircase: a fireplace, a mantel clock, wine glasses, and a flowering plant under a glass bell jar.  Emily occupies a different niche in children’s books about the poet and it succeeds in its idiosyncratic approach. 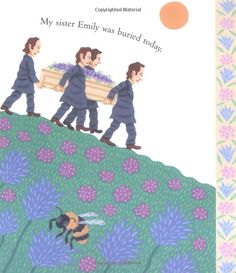 Jeanette Winter is a prolific children’s book author and illustrator, who has taken on many literary and artistic subjects, including Georgia O’Keefe, Henri Matisse, and Joseph Cornell. She has also celebrated heroes of literacy in Biblioburro, and The Librarian of Basra: A True Story from Iraq, both about people committed to saving books and bringing them to the public.  The influence of Matisse is apparent in Emily Dickinson’s Letters to the World, which, in a smaller format binding, suitable for holding in one’s hand, she pays tribute to the poet and her work.  The book begins as a biography, with a sad description of Dickinson’s funeral by her sister.   This is an unusual way to begin a book for young children.

Then again, the extensive selections from her poems would also not appeal to that age group. Although she does include some of the less opaque nature poems, as well as the one that gives the book its title, these are still demanding literary works.  The minimal and simple statements about Dickinson’s life, such as “Poems –and poems—and even more poems—there must be hundreds! This, then, is what Emily was writing—day and night it must have been,” almost contradict the complex examples given of her work.  I almost wonder if this book isn’t intended as a work of art, a kind of Emily Dickinson scrapbook, for adults.   In fact, it doesn’t really matter.  The figure of Emily Dickinson in a white dress, standing on a book that is transporting her over blue seas to a land of purple mountains, is a literal explanation of the lines below:

“There is no frigate like a Book
To take us Lands away
Nor any Coursers like a Page
Of prancing Poetry.”

If a child has no idea what a frigate is, the picture evokes the metaphor, while the sound of the poem should make a deep impression.

The Mouse of Amherst has a different ambition, to portray Emily Dickinson’s life through the parallel life of a mouse named Emmaline, coincidentally also a poet.  This is not a picture book, but a story for independent readers with text by renowned poet Elizabeth Spires and spare black and white sketches by artist Claire Nivola, whom I have blogged about before.  The animal as both narrator of and participant in a famous person’s life is not new; one of the best known examples is Robert Lawson’s Ben and Me about Benjamin Franklin’s church mouse biographer, Amos (adapted in an Academy-Award-winning animated short by Walt Disney). Emmaline has literary ambitions, as well as not being indifferent to fame. “…I was secretly pleased to find myself in one of her poems,” she admits, after reading Dickinson’s “Papa above!/Regard a Mouse/O’erpowered by the Cat!” “We were fast becoming friends!”

It cannot have been easy to interweave the poems of Emily Dickinson with those of Emmaline and to include both within the narrative of their intertwined lives.  Nivola’s drawings are delicate and minimalist, a perfect complement to the poems themselves. Again, the audience for this book might include precocious elementary school students who aspire to be poets, or adults intrigued by the ambitious premise of the book.  Given its short length, I think the book would be perfect for an elementary or middle school teacher to use as a resource in American literature.  It would require faith in and respect for the intelligence of children, but sometimes that pays off.

“This Travel may the poorest take
Without oppress of Toll —
How frugal is the Chariot
That bears the Human soul.”

2 thoughts on ““There Is No Frigate Like a Book”: Emily Dickinson for Kids”