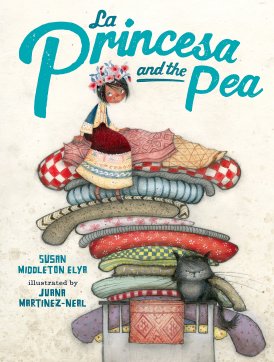 It’s not easy to reconfigure a traditional fairy tale in an original way; every year many children’s books attempt to do so.  This year’s Pura Belpré Illustrator Award winner uses intensely colored images drawn from traditional Peruvian textiles as a setting for the story of the picky princess.  The text, short enough to entertain a young child or to amuse an older one, is as innovative as the pictures.  There are English rhymes, Spanish rhymes, and Spanish-English rhymes, all propelling the story forward to its inevitable conclusion. (There is a glossary at the beginning of the book to help guide the reader who may need assistance.)

As a Romance language, Spanish has many words ending in vowels, giving the language a melodic quality that lends itself to rhyme. However, it is one thing to rhyme boda and de moda (wedding and stylish), another to experiment with off-rhymes, such as el guisante and veinte (the pea and twenty).

Then there is the really imaginative bombones and colchones (candy and mattresses).  Each noun here has both matching vowels and consonants in the last two syllables, the same vowels but different consonants in the first.  Susan Middleton Elya’s bilingual rhymes add even more humor and delight with fleece and gris (grey) bedding, and the impressive ring of jardín (garden) and queen.  You get the picture; this is not a Princess and the Pea that we have seen before. 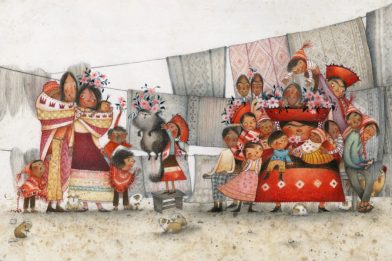 Speaking of pictures, Juana Martínez-Neal finds in a source in the provinces of Cusco and Arequipa. They are not generic folklore, but applications of artistic tradition woven into character’s clothing, faces, and settings.  The guinea pigs and llamas native to the Andes add authenticity, but the scowling and demanding mother suspicious of any potential bride keeps the story in the fairy tale category.  The final two pages ingeniously echo other tales, with the prince and his bride having “hijos galore,” so many children “and then no more.” Both parents hold babies on their backs in traditional infant carriers, and the now smiling grandmother is surrounded by the rest of the brood.

La Princesa and the Pea offers, cultural diversity, traditional and contemporary illustration art, and an inventive bilingual text to both entertain and teach.  Fortunately, the Pura Belpré Award will bring it to the attention of many more readers.