Last week, the great French designer Hubert de Givenchy died at the age of 91.  Although his long career included a series of great accomplishments and innovations, he will always be remembered to many as the man who dressed Audrey Hepburn.  Obituaries recalled his own anecdote of preparing to meet an actress named “Hepburn” in his fashion house, and being initially disappointed when a slender young woman dressed in “ballerina flats and a straw gondolier’s hat” showed up instead.  From then on, she became both a professional inspiration to him and a lifelong friend.

Sadly, Hepburn herself did not enjoy the long life of her companion; she died in 1993 at the age of sixty-three.  Margaret Cardillo and Julia Denos’ Just Being Audrey gently avoids discussing her death, but their thoughtfully researched and beautifully designed love poem to the iconic actress and humanitarian is anything but patronizing to young readers.  Picture book biographies based on the childhoods of famous figures are not new. It is an obviously appealing idea to present to children what great people were like when they were just kids. While some of these books rise to the task of connecting childhood creativity and persistence to later success, others follow a hollow and misleading formula. Einstein as “bad at math.” You are bad at math….

….You, too, may grow up to be Einstein.  Cardillo and Denos have recreated Hepburn’s childhood and later career by connecting her early experiences and formative values to the trajectory of her life in a convincing way.

Hepburn’s unstable childhood in war-torn Europe is presented without unusual claims of heroics, and acknowledges her fear and her joy at liberation.  Cardillo describes the young Audrey’s disappointment at being too tall for a career in ballet, but she avoids suggesting that this was a tragedy, or that a perfect alternative presented itself without effort:

“Audrey soon realized that her dream of being a ballerina was not going to become a reality.  She was simply too tall, and no amount of practice could change that.  She decided to try acting instead.”

This type of measured, almost pragmatic, description of Hepburn’s choices is consistent throughout the book, as when Cardillo compares the actress’ screen roles to those she assumed in real life:

“Audrey often played characters who went through some kind of transformation, both inside and out.  But in real life, Audrey always knew just who she was, and just where she had come from.”

The subtle choice of words, such as qualifying “transformation” with the phrase “some kind of,” indicate how attuned the author is to her picture book audience, children looking for inspiration and realistic role models in the same reading experience. 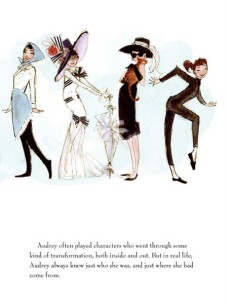 Denos is an award-winning author as well as illustrator, and the interplay of her images and Cardillo’s text is perfect.  The design portfolio come-to-life of Hepburn dressed in the magnificent creations of Givenchy and other designers on one double page spread succeeds in proving to the reader that Audrey as the determined chauffeur’s daughter Sabrina Fairchild, Audrey as Eliza Doolittle dressed for the races at Ascot, and Audrey in all-black beatnik garb punctuated by white socks are still all Audrey.

Later, when her “roles” include cooking spaghetti and meatballs for her family or walking her dog, the transition is unforced.  The “real” Audrey is portrayed as fulfilling different but equally significant parts of her life.  An unforgettable image of Audrey meeting Colette, author of Gigi reflects the value of youth paying tribute to age.  A very tall Hepburn, dressed in her signature black pants and white cropped blouse shakes white-gloved hands is shown together with the aging matriarch of French letters, now seated in a wheelchair.  There is no need to “spell out” for children that these women are at opposite ends of their life spans.

The last part of that life, as a spokesperson for UNICEF who made many trips to actively engage in aid programs for children in Africa, is depicted as one more natural development in a life directed by artistic ability and ambition, as well as compassion and memory of her own past. At the end of the book, there is a useful timeline and brief bibliography. The author and illustrator each include carefully worded notes at the end, explaining the specific inspiration presented to them by Hepburn’s life.  The unusually humble tone of their words echoes the understated beauty of Just Being Audrey, a work to be shared by elementary school level readers and older, and their caregivers. (In May, Balzer + Bray will release Just Being Jackie, by Cardillo and Denos, a tribute to Jacqueline Kennedy Onassis.)