As Good as Anybody – Richard Michelson and Raúl Colón, Alfred A. Knopf, 2008 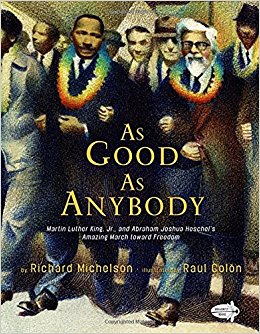 On Wednesday, April 4, we remember the 50th anniversary of the Reverend Dr. Martin Luther King’s brutal assassination in Memphis.  There are many excellent picture books about his life and legacy, as well as about other activists in the movement for civil rights. As Good as Anybody stands out for its specific focus on King’s relationship with Rabbi Abraham Joshua Heschel, who marched alongside King and chose to use his religious authority to encourage support racial equality and condemnation of white supremacy.  The book introduces the biographies of these two men separately, emphasizing parallels between the two religious leaders from boyhood on, but without glossing over important differences in their experiences.

Both King and Heschel were the sons of clergymen.  Richard Michelson records King’s anger and frustration as he realized, from a very young age, that the daily restrictions of his life under Jim Crow laws and the global injustice they represented needed to change.  Heschel’s childhood is described as poor, but supportive, until the rise of Nazism grew to threaten, and eventually extinguish, much of Jewish life in his native Poland.  Heschel escapes to America, although most of his family perished in Europe.  Upon arriving in a haven represented for him by the Statue of Liberty (shown in Raúl Colón‘s brilliant illustrations), Heschel learns that the promises of liberty remain unfulfilled for many of his fellow citizens.  The lives of King and Heschel become joined in friendship and activism. Michelson draws the specific parallel for young readers:

The book describes the march from Selma to Montgomery and the violence inflicted on African-American marches by the police.  The story concludes with King and Heschel, along with thousands of other supporters, joining in solidarity on a subsequent march along the same route, and quotes Heschel’s powerful statement that “I feel like my legs are praying.”

One minor issue with the book is a certain inconsistency in language, which makes it unclear which age child it best serves.  Michelson begins with the sentence “Martin was mad at everyone,” using an experience which very young readers would assimilate emotionally, with little background knowledge.  Similarly, in describing the Nazi terror, he states “…a man named Adolf Hitler had been elected leader of Germany and changed the laws.”  The need to use the phrase “a man called” to modify Hitler assumes totally uninformed readers.  At the same time, other sections of the book imply that it is suitable for at least elementary age independent readers.  Some might also criticize the relative simplicity of the story’s resolution, but I find both the text and pictures to strongly articulate the violence and systematic oppression that confronted King and his fellow protestors.  One picture of Klan members attacking marchers shows their jeering faces distorted by hatred, as well as their fellow white citizens joining in without the protecting anonymity of white robes. The book definitely portrays the civil rights movement as propelled by the activism of those most directly affected: African-Americans.  Whites are supporters and fellow proponents of change.  At the same time, there is a clear connection drawn between Heschel’s sufferings as a European Jew and his insistence on using that experience to encourage empathy and progress.

There was significant controversy over Ava DuVernay’s film Selma and its omission of Heschel’s participation in the events she recreates. Regardless of your opinion regarding the director’s decision, As Good as Anybody offers an opportunity, one among many, to introduce young people to Dr. King’s life, and to the involvement of Rabb Heschel, as one moral and religious figure complementing and supporting the work of another, one of the greatest in our nation’s history. The book includes a useful if brief afterword, which includes the crucial information that King was assassinated while demonstrating for economic justice in the Memphis sanitation worker’s strike of 1968.

There are many other books dedicated to describing and illustrating Dr. King’s life and to illuminating key events of the movement for civil rights. Two of the most beautiful, in my opinion, are I Have a Dream, with Dr. King’s own words and the emphatic, almost photo-realistic pictures of Kadir Nelson, and Sit-In: How Four Friends Stood Up by Sitting Down by Andrea Davis Pinkney and Brian Pinkney, which uses understated and courageous language, along with broad brushstrokes of primary color to make the lunch counter sit-ins come to life.

One thought on “Remembering Dr. King”