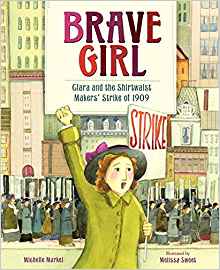 Today is May Day, known internationally as the workers’ holiday, the day to acknowledge the contributions of labor, to honor the history of workers, and to stand up for the rights of working people. In the U.S., our Labor Day is in September; the decision to distance it from the more radical associations of Europe’s labor movement was a conscious one. Fortunately, there are many children’s books, both fiction and non-fiction, which introduce kids to the trade union movement and other social and political organizations that empower the people who produce what we all need or want (The Horn Book just posted a list here).

Even the youngest children can identify with the persistence of the animals refusing to be exploited in Click Clack, Moo: Cows That Type, also available as a beginning reader for beginning activists.  The Day the Crayons Quit shows as much conflict between the crayons as resentment against the people who exploit them, which may be more realistic, if less inspiring.

MY favorite non-fiction picture book (also on the Horn Book list) about a real leader of the labor movement is Brave Girl, the true story of Clara Lemlich, a Jewish immigrant who found her place in the early twentieth century garment workers’ crusade for safer working conditions and adequate pay (I previously wrote about Lemlich for Tablet Magazine.)

…although both words and text are simple and straightforward enough for children of elementary school age.  Michelle Markel and Melissa Sweet document these conditions in the poetry of everyday language woven together with colorful images as expertly as the shirtwaists sewn by exhausted young women.

“If you prick your finger and bleed
on the cloth, you’re fined.  If it happens
a second time, you’re fired.

Clara smolders with anger, not just for
herself, but for all the factory girls, working like slaves.  This was not
the America she’d imagined!”

Not only is Clara smart enough to realize that she is being exploited, but she also quickly learns that her male co-workers refuse to believe that “the ladies are tough enough” to join their protests.  She takes matters into her own hands, sharing here experiences with other women and exhorting them to strike.  One page depicts only Clara hands, handcuffed and confronting a policeman’s club threatening her, and her torso clutching the bars of a prison: “They break six of her ribs, but they can’t break her spirit. It’s shatterproof.” 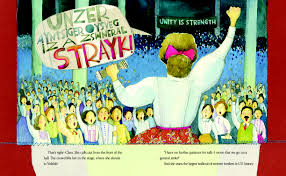 Sweet’s ingenious illustrations combine real documents used as collage elements with pictures of Clara and her fellow workers portrayed from every angle. We get a bird’s eye view of rows of factory workers bent over their sewing machines, as well as watching Sara’s back from behind the stage as she addresses her supporters in Yiddish and English.

Brave Girl includes a section with further information about the garment industry as well as a bibliography.  Markel has dedicated the book: “For workers everywhere.” Sharing Markel’s and Sweet’s work with children is a joyful and proud experience. Happy May Day!

3 thoughts on “Happy May Day!”