This is the week when we celebrate independence in both Canada and the U.S.  In writing for this blog, I have dedicated a number of entries to works by Canadian authors and illustrators, some published by the Canadian Presses Tundra, Simply Read, and Kids Can (e.g., A Pattern for Pepper; The Pink Umbrella; Julia, Child; How To; Singing Away the Dark; Suki’s Komono). Although these books are all different, I find a common thread of artistic individuality and respect for children’s imagination.  As an American, I enjoy learning about new authors and illustrators, both Anglophone and Francophone, and noticing both commonalities and different emphases from U.S. children’s books. 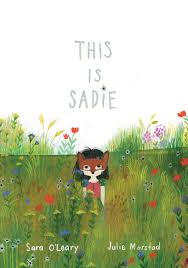 As you know if you read my blog regularly, Julie Morstad is one of my favorite illustrators, and her collaborations with author Sara O’Leary are wonderful odes to the childhood fantasy.  In This Is Sadie, we meet a little girl who lives in literature, literally in the case of one picture, which is a two-page spread of a swimming pool filled with characters.  Wearing goggles, flippers, and the same red and green dress she prefers on land (“And then she chooses a dress./’Don’t tell the others,’ she whispers,/but you are my favorite.’”), Sadie dives into a world of mermaids, swans, bears, and other literary creatures.  Her companions, from Mowgli to Alice, are as real to her as the ordinary bedroom where she wakes and plays actively but quietly, “because old people need a lot of sleep.” Cardboard boxes, an old fashioned record player, and, of course, piles of books, are part of the elaborate scenery.

The melding of fantasy and reality is a staple of children’s literature, but O’Leary and Morstad manage to make this process different in their collaborations, such as Where You Came From, When I was Small, and When You Were Small.

Sadie wears antennae and assures her readers that she has wings and they do, too.  Yet the text and pictures describing her inner world are understated.  She has a fairy-like mushroom lamp next to her bed. She constructs a simple tent and decorates it with paper chains, and she casually flies home, suspended over a small green house with red shutters and smoke coming out of the chimney.  Sadie makes clear to children that physical and mental creativity are linked:

“Sadie likes to make boats of boxes
and castles out of cushions.
But more than anything she likes stories,
because you can make them from nothing at all.”

I’m looking forward to a new release from Morstad, and author Camille Andres, next month, The Dress and the Girl (Abrams Books for Young Readers).