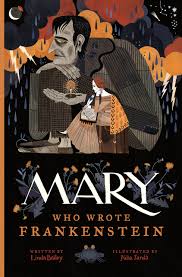 It was a dark and stormy night when eighteen- year old Mary Shelley conceived the idea for a ghost story about a tragic being, assembled from body parts.  Dr. Frankenstein’s monster became a literary sensation, and a still relevant commentary on what can happen when technology outpaces morality. In this bicentennial year of her novel’s publication, Tundra books has released Linda Bailey and Júlia Sardà’s engaging and accessible picture book introduction to Shelley’s genius. Bailey’s text manages to place Shelley in the context of her own time, as well as of feminist empowerment of girls who go against the grain.  Sardà’s rich and mysterious pictures are the perfect vehicle for drawing young readers into Shelley’s world.

Bailey’s tone is conversational, as if she were sitting down with a child and explaining to her how tough it was to be Mary Shelley, and how the author inherited a bold skepticism from both her parents. Unfortunately, her mother, the pioneering advocate for women’s rights Mary Wollstonecraft, died shortly after Mary was born.  Her father, radical philosopher William Godwin, was less than enlightened when it came to supporting his daughter’s independence.  Bailey builds her narrative about the importance of freedom for women without moralizing.  “By the time she’s fourteen, she has become a Big Problem.” What independent girl can’t relate to that, even if she didn’t grow up, as Mary did, listening to Coleridge recite The Rime of the Ancient Mariner in her living room?

Mary Shelley’s participation in a ghost story writing competition with her husband, Percy Bysshe Shelley and Lord Byron, is the stuff of legend.  Bailey turns it into one about female persistence. As Shelley and Byron nag her to reveal her idea, they lose interest: “Shelley and Byron get bored. They stop writing stories. They start to plan a sailing tour around the lake instead.” Mary, on the other hand, has been listening more than talking. She decides to incorporate what she has heard about new scientific discoveries to integrate the experiments of the Italian scientist Luigi Galvani into her terrifying tale.  An excellent “Author’s Note” provides more information about the background and genesis of Shelley’s novel.

Julia Sardà’s illustrations are as lugubrious as Frankenstein itself, but also witty and allusive.  The major characters first appear, labelled, on a two-page spread.

Later we see them seated at a table, surrounded by a raven, a black cat, and a bundle of documents topped by a skull.  Quill pens and an eyeglass case remind the reader of the task at hand.  People are drinking, coffee perhaps, but Lord Byron, at least, must have something else in his glass.  A picture of Mary lying on her mother’s grave reveals on the tombstone’s inscription that Mary Wollstonecraft Godwin was the author of A Vindication of the Rights of Woman, while an image of the world two hundred years later is a gorgeous rendition of London.  Moviegoers are queued up to attend the premiere the 1931 Frankenstein movie with Boris Karloff’s face on the marquee.  It is a dark and stormy night, with rain pouring down on double decker buses, and a small ad for raincoats almost hidden to the side of the cinema. (You can also see an ad for Brylcreem, a vintage hair product.) The book’s incredible cover features Mary Shelley seated in the crook of her creation’s arm. The monster holds a candle in his giant palm, enabling her to work on her story.

Mary Who Wrote Frankenstein rejects clichés to give young readers insight into literary creation and the difficult road traveled by Shelley as she pursued her dream.  The book’s inventive text and sophisticated pictures work together seamlessly. “HOW DOES A STORY BEGIN?/Sometimes it begins/with a dream.”  Perhaps it did here, as well.