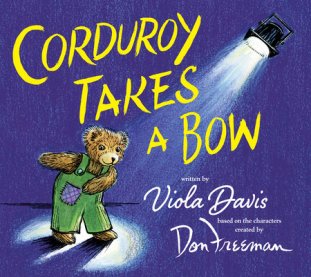 In his fifty years, Corduroy the Bear has had a couple of close calls. Nearly ignored in a toy store, left behind in a laundromat, he has always been reunited with his friend, Lisa, reassuring children that people will look out for them and reward them with the affection they need and deserve.  In actress and author Viola Davis’ new book, Corduroy goes to the theater, where he is accidentally transformed from a spectator to an actor. He is acclaimed in his new, if brief, career, but is happiest returning home to Lisa’s apartment and her homemade doll stage, where two carefully aimed flashlights illuminate her original play.

Don Freeman, the original creator of Corduroy, will be the subject of an upcoming show at the Museum of the City of New York, (link below). Viewers will be fascinated to learn about the multifaceted artist’s work, including his brilliant depictions of the New York City theater and jazz worlds, as well as everyday street scenes of the adopted home.  Freeman was immersed not only in the world of teddy bears, but of guys and dolls as well….

In Corduroy Takes a Bow, Lisa’s mom takes both her and her bear to see their first theatrical performance.  Lisa is apprehensive at the scale of the building, and fascinated by the glorious surroundings. She is also too short to see over the man in the seat in front of her, and this leads to a series of events in which the hapless but calm bear learns about life both backstage and in front of an audience.  Davis communicates her love for the theater to young readers, as well as the tension of temporarily finding yourself where you don’t belong.  Corduroy doesn’t speak, but he does have child-like thoughts, and we admire his pluckiness and survival instinct. Stuck in a maze of scenery, he plants himself in an attractive prop, declaring, “Well…this is more like it. Not too high, not too low. This is just right…I love the theater!”

Jody Wheeler has written previous continuations of Corduroy’s saga, including Corduroy Lost and Found. (Other Corduroy books have been illustrated by Lisa McCue, including a Hannukah book!  It isn’t easy to extend the work of a brilliant artist; the successor can imitate her model as closely or possible, or choose to reinterpret the character she has inherited.  Wheeler’s pictures are bright an appealing. She uses a similar color palette to Freeman’s and generally stays close to the spirit of his original creations.  She is most successful when she gives herself the opportunity to extend her model, as in the two page spread of Lisa’s doll show, as she guides a ballerina looking much like herself over an improvised tight rope in her little “theater.” Corduroy is enthroned on a rocking chair, while Lisa’s other toys, including one who seems to be Raymond Briggs’ Snowman, enjoy the show along with him.

Corduroy Takes a Bow brings Freeman’s character back to young readers. Davis has obviously undertaken a labor of love in using the bear to draw children into her own world of theater, and Wheeler’s pictures will not disappoint kids who love Corduroy.  Being fortunate enough to live in new York, I am looking forward to seeing the full scope of Freeman’s New York panorama in A City for Corduroy: Don Freeman’s New York.