It’s hard to see how kids could not like a book about dressing up as their favorite food.  It’s easy to see how adults might view such a project as pandering to children’s love of doughnuts and popcorn.  But wait, Frankie, the hero of this inventive tale, also loves sushi, falafel, and sardines, as least as characters in his school’s play. Not only that, but he dreams of orchestrating a production starring such imaginative combinations as “nachos with spring rolls and marzipan on top. In this inventive story by author and illustrator Kelsey Garrity-Riley, a child whose refusal to pick favorites results in an extravagant theatrical tribute to the joys of both food and musical theater, as well as of being a generalist.

Frankie is the kid who doesn’t want to be part of the melting pot, or mixed salad, or whatever culinary metaphor for individuality within diversity you choose.  His teacher, Ms. Mellon, whose grey dress, grey hair, but bright red glasses signal that she is a little predictable but open to change, proposes a school play in which each student dresses as her favorite food.  While everyone else is dressing as pretzels or trying on pineapple hats, Frankie stands alone to the side.  He isn’t a rebel, but he just won’t be forced into choosing between chowder and guacamole.  He sends a validating message to any child who has been told that loyalty to just one snack, or activity, or future career, is essential to success.  Ms. Mellon finds the perfect solution, allowing everyone to stick to his conviction that either avocados or cupcakes are the best, while putting Frankie in charge of the “Foodstravaganza” as costume manager. 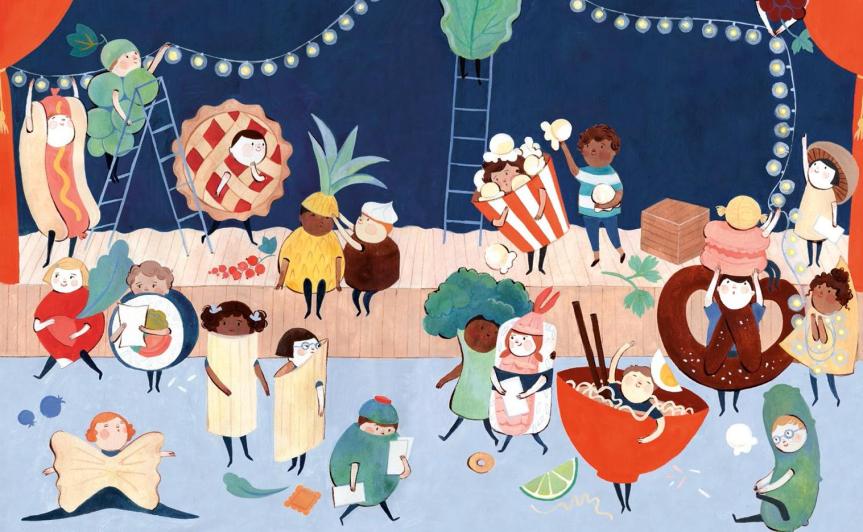 As you might expect, a spectacle this demanding has some dicey spots, from a burrito boy rolling off the stage to some awkward moments with preschoolers playing rice and beans, but Frankie’s enthusiasm and brilliant multitasking make everything go smoothly.  There are plenty of food puns for adults, including “GOUDA job, guys,” and “it’s a PITA that song wasn’t longer.” My experience is that kids are often interested in simple explanations of why their parents are laughing at, for example, a reference to “the FALAFEL of the Opera.” Even if they don’t yet share our enthusiasm, they may be intrigued at what grownups find funny.  Don’t underestimate them, or just enjoy the motto of the French Revolution applied to a chorus of fruits.

Frankie’s Favorite Food is unpretentious fun from curtain raiser to curtain call.  This is true whether you would choose to wear a jar of pesto or sing in the Snack Pack trio.  Maybe you don’t even need to decide.