The Map from Here to There – Emery Lord, Bloomsbury YA, 2020 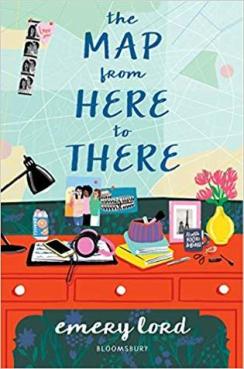 The Map from Here to There is a quiet, reflective novel about a teenager’s road from somewhere, a family and friends with whom she is imperfectly happy, to somewhere else, the unknown endpoint of life after high school.  It is full of all the indecision and insecurity of life itself, and specifically of the tensions in a romance which may be only one moment of many as the protagonist, seventeen-year- old Paige Hancock, tries to figure out her future.  Young adult readers will see themselves in a cast of characters undergoing ordinary dilemmas, which seem extraordinary to them at the time.

There are many qualities to like about this book.  The narrative builds slowly, accurately mirroring the way in which Paige experiences the day-to-day consistent realities and the gradually accruing changes which make the last year of high school unsettling.  Her parents are separated, but approaching a reconciliation, and she has a more unusual emotional wound as well, having lost her first boyfriend in a tragic accident.  Paige is fragile, but also determined, after a summer program at NYU, to pursue a career in screenwriting.  Determination, however, is relative, as she is becoming more ambivalently attached to Max, finding herself in a relationship which is rewarding and compromising at the same time, since it the potential to derail her commitment to choosing the best college program for her ambitious plans.

Unlike the case in some popular YA novels, Paige’s life is not one of unremitting tragedy, although it has tragedy within it.  Her friends are supportive, if sometimes as inclined as Paige to allow insecurity and disappointment to overtake them.  Her parents are subject to financial as well as psychological limitations, but they love her, and she can rely on that anchor even when life seems overwhelming.  College admissions is part of the difficult equation, one in which distant adults are determined to throw a wrench into kids’ lives.  Paige summarizes that part of adolescence in one acerbic and funny pair of sentences: “When people called it ‘the sting of rejection,’ they weren’t kidding.  It actually stung, like a slapped sunburn.’” If the reader occasionally expects a simple resolution to Paige’s confusion and potential heartbreak, the author refuses to offer one.  Instead, there are many maybes, as Paige thinks about her own responsibility to cope with difficulty, when to rely on her instincts, and when to ask for help. As she relates life to her summer improv class, she summarizes that “I’d learned to say yes, and.”

Paige is never at a loss for a good metaphor. Watching a performance at the local theater where she has worked as an intern, she sums up her recognition that there is no definite conclusion to her journey:

During the Sunday matinee…I watched with a calm deep in my bones.  It was the feeling of a plane’s descent, of the steering wheel nudged toward the last highway exit. The distinct feeling of being almost there.

The Map from Here to There assumes that young adults are intelligent and ambivalent, eager to map out a life but hesitant to finalize plans, and receptive to reading about someone who has been there and survived.