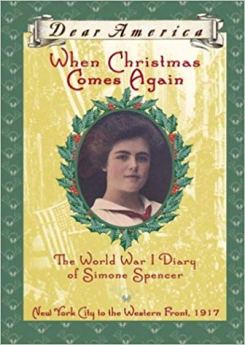 The Dear America series from Scholastic is a constant source of both repetition and surprises. (see my earlier articles here and here) Each fictional diary records the thoughts and experiences of a girl living through a critical time in American history.  The literary quality varies, and so does the level of sensitivity to such inescapable realities as class, race, and religion.  The heroines may not all be feminist by modern standards, but they consistently admire qualities in girls and women which were not necessarily prized at the times in which the novels take place: independence, physical and emotional strength, questioning of authority. The heroine of when Christmas Comes Again, by Beth Seidel Levine,  learns to appreciate the fact that her life has been governed by what today would be termed privilege.  Yet the historical background of the story, and the appealing lack of self-consciousness which characterizes Simone’s diary, elevate the novel above the predictable formula of personal growth.

Simone is a society girl in love with New York City, at least the New York City that she knows.  Living in a mansion where the cook is her “friend,” strolling through Central Park, attending an elite girl’s school, she can barely imagine a different life, although the reality of American involvement in Europe’s World War begins to affect her plans.  Simone also has a role model for difference within her own family.  Her affluent American father had met her working-class French mother in the bakery which Simone’s maman’s family then owned in Paris. While Simone’s mother eagerly embraced her married life among the New York elite, she insisted upon owning her own millinery shop to avoid boredom and dependence.  (This particular detail of the story strikes me as less than realistic.). Simone’s parents are far more supportive than those of her peers in understanding that she needs to find her own path.

When nursing and volunteer work fail to fulfill Simone’s need to combine service with adventure, she uses her fluency in French to join the U.S. Army’s Signal Corps as a telephone operator near the front lines in France.  (At least, she believes that she has joined the army.  The book’s historical afterward points out that the women who enlisted in this selective program were actually not considered to be veterans entitled to honors or pensions after the War.). Her brother, Will, is also a soldier, and Simone ships out ready for the experience and new identity she is seeking.  A warm friendship with a working-class girl from Boston begins to open her eyes to inequality, while falling in love with Sam Cates from New York City’s impoverished Lower East Side fully transforms her self-satisfied beliefs into empathy:

Do you know what kind of conditions other people live in, Simone? Do you know       what it’s like to work in a factory twelve hours a day and then come home to a one-room apartment that you share with five or six other people? And I think you must honestly believe that you are adored by ‘the help,’ when they laugh at you the moment you leave the room.

Obviously, Simone’s answer to every one of Sam’s rhetorical questions would have to be “no.” Yet the reader also understands her frustration at his moral self-righteousness, and her eloquent self-defense.  The meeting between Simone and Sam may be more fraught than the fairy tale encounter between her own parents, but everyone in the novel survives wounds, physical and emotional, to move forward after the War.

Simone Spencer and Sam Cates: who would have thought it possible? Dear America offers series historical fiction that sometimes transcends the ordinary.