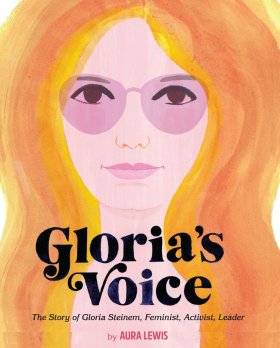 Gloria Steinem’s name evokes the movement to liberate women from all the restrictions historically placed on us. Introducing to young readers her work on behalf of economic justice, reproductive rights, political participation, and empowering consciousness-raising, is a challenging task.  In Gloria’s Voice, author and illustrator Aura Lewis has chosen to embed Gloria’s message of liberation in simple language and colorful pictures with subdued symbolism, reserving many details for notes at the end of the book.  The result is a kind of two-books-in-one, which allows optimism to dominate, while providing additional information to supplement information in the text.  Some adult readers may find that this mechanism compromises the truths of Steinem’s complex life and career, but children will definitely come away with a message of female strength,

At first glance, Lewis’s pictures are full of pastel colors and cheerful colors, even when characters confront difficult realities.  Gloria first appears dancing across the keys of a typewriter. On the next pages, she is absorbed in reading about female heroines under a background of oversized flowers.  Yet within some of the illustrations there are more provocative images open to different interpretations.  Facing in the opposite direction from the girl propped on her elbows, reading, are a tiny-scale elephant followed by its child, a likely reference to Gloria’s painful challenge of caring for a mentally ill mother.

A scene of mother and child against the background of New York City, where Gloria’s mother had hoped to pursue dreams of journalism, shows Gloria holding hands with Steinem; both are serenely smiling.  Only in the “Page-by-Page Notes” do readers learn that Ruth’s illness was psychiatric. The story itself refers only to the fact that she “falls ill,” and the one-page biographical summary states that “Gloria lived with her ailing mother.” This choice may serve to stigmatize mental illness, or simply to relegate some painful aspects of Steinem’s life to the book’s backmatter, where interested readers may access them.  There is undoubtedly some dissonance in the book’s structure.

Then again, maybe the pictures themselves reveal some of the young Steinem’s suffering. One two-page spread shows an uncharacteristically sad Gloria playing with a large dollhouse. Inside, the figure of her mother has been reduced to an exhausted figure covered by a blanket, a book open in her lap, and the slippers at her side pointing to her immobility.  “Sometimes, it’s as if Gloria is the grown-up and her mama is the child,” the text reads. Even the use of the word “mama” here intensifies the inappropriate nature of the role reversal. Gloria is a child herself, forced to care for an incompetent parent.  Some readers may understand this situation to be frightening, while others, if they have not experienced the situation themselves, may read the text literally as one small disappointment, especially as it is followed by Gloria’s many achievements.

That typewriter keeps showing up, with Gloria typing articles about the silly features reserved for women journalists, and, finally, as she strides the keyboard in her 1970s bellbottoms, envisioning the “big idea” of Ms. magazine.  The “Page-by-Page Notes” are keyed not by page number but by image.  They are inconsistent. Readers do not learn which “friend’ sent her to cover a meeting of the women’s liberation movement, while the notes do add more complete information about “Dorothy,” as Dorothy Pitman Hughes, the African-American activist with whom Steinem founded Ms.  Some of Aura’s decisions about whether or not to include information in the text may seem random.  There is a key to the picture of people, some ordinary and some famous, lining up to buy a copy of the magazine.  Bella Abzug is wearing a signature hat, but otherwise looks uncharacteristically demure.

Gloria’s Voice does allow children, to hear that voice, offering a moving account of Steinem’s progress from sad childhood to remarkable life of advocacy on behalf of women and men.  Its inconsistencies are real, but they do not ultimately take away from the experience of readers aged seven and older, as they are immersed in Steinem’s life of commitment to change.