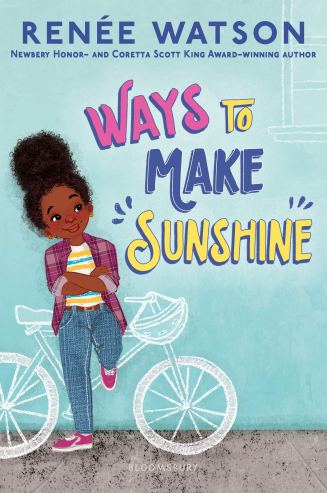 There is an ever-growing list of chapter book series about grade school-aged girls with determined and lively personalities.  Some of these are formulaic and predictable; Renée Watson’s Ways to Make Sunshine is not.  The first release about fourth-grader Ryan Hart, from the author of Some Places More Than Other,  introduces a bright and introspective character, part of a loving but decidedly not perfect African-American family in Portland, Oregon.  Early in the novel, Ryan’s father reminds her that her name is derived from the word for “king,” and that she will grow into the strengths and traditions of her people and her own best qualities.  The encouragement and solidarity of her close-knit family are sources of support for Ryan; even her older brother Ray’s teasing is less important than his protectiveness. Yet it isn’t always easy to live up expectations.

Ryan’s family has moved into a smaller home after her father was forced by circumstances to take a lower-paying job.  Economic hardship has an impact on everyone.  Ryan’s social circle has been disrupted, and the physical space of the new house seems restricting.  Watson realistically describes the emotional impact on Ryan’s mother; adult’s stress filters down to children in ways which are difficult for them to understand.  Her mom is patient, yet not infinitely so.  Ryan’s grandmother shows her unconditional love by skillfully straightening Ryan’s hair with the skills of the professional beautician she had been before retiring.  When Ryan’s needs diverge from her mother’s and grandmother’s in this episode, every child who has argued with parents about her appearance or dress will relate to the difficulty of weighing parents’ best intentions against a young person’s need for independence.

Friendship is never easy for kids Ryan’s age, and Watson manages to portray both the joys and frustrations of competition among kids, especially when it verges on cruelty.  Her optimism, the way in which she finds “ways to make sunshine,” does not prevent her from experiencing anger, sadness, or even, with her brother, the desire for revenge.  Watson assures young readers that their feelings are valid, that even the most resilient young person has moments when the injustice of events or of adult’s seeming obtuseness are hard to take.  One of the book’s most skillful and touching subplots involves Ryan’s speculation about a tin of objects left in the house by a former resident, perhaps long ago.  Watson resolves it in an unexpected way, respecting the importance which children may assign to incidents which adults see as trivial.

Nina Mata’s pictures of Ryan, and her friends and family, capture their spirited individuality.  Ryan’s grandmother lovingly tending to her granddaughter’s hair, Ryan terrified as she tries to deliver an address in her church, and Ryan’s parents dancing together in their kitchen, all reflect Watson’s warm and engaging text.  Ryan Hart seems ready to grow into her name.