When Emily Was Small – by Lauren Soloy, Tundra Books, 2020

Picture book biographies for children that examine the childhood of a famous person are not a new phenomenon. There are several series dedicated to the assumption that kids will enjoy reading about accomplished grownups when they were just kids.  When Emily Was Small is a different kind of book, using the young life of renowned Canadian painter Emily Carr as a lens focusing on her almost mystical connection with nature. Rather than depicting her early experiences with art, it suggests to children that the roots of her future creativity were apparent in her encounters with the natural world when she was small.

Lauren Soloy makes her purpose clear from the beginning, telling readers that “Once there was a girl who would grow up to be the artist Emily Carr.  But this is a story about when she was small.”  Those two brief evocative sentences let children know that their own perceptions matter.  In an afterword, she gives biographical information about Carr, and explains that she drew on the artist’s autobiographical The Book of Small. The young Emily of the book interacts with many elements of nature, greeting beans, leaves, and currant bushes with a personal “hello,” and receiving in return the different sense impressions each one could offer:

Hello, wild place, Emily said.
It answered her with a sweet
pink smell that called to bees
and butterflies and other
trembly things.

That verbal image of “trembly things,” like so much in the book, captures the intuitive poetry of childhood.

Her companion in the book is a kind of Sendakian personification of the wild, named Wild.  When she first meets him, he is baring his teeth, but so is she. They soon become friends, holding hands and even flying together through “restless seas and towering trees, and observing joyfully together all the wonders of nature.  Wild’s remark that “…the color you think of as green is really a thousand shades and hues” is also a description of Soloy’s gorgeous color palette, along with other pastel hues, and Small’s striking black hair and white dress.

The opposite of Wild is Emily’s mother, shown only from the back or as a faceless body. Sadly, she is unable to empathize with her daughter’s special visions, which, in one picture, Soloy represents as a cascade of objects emerging from the girl’s meditation, where they are endowed with new life. Instead, she admonishes Emily for dirtying her dress. When she brushes off the dress, “Emily felt herself shrink back down to become something small once more.”  What child has not, at some time, felt herself diminished by the insensitivity of an adult authority figure, even a parent?  Yet readers learn in the afterword that Emily was not defined by these limits, growing up to be a woman dedicated to beauty, “…who strove her whole life to experience the bigness of things.”  A portrait of Carr, confident in her visions, looks out, assuring children that being small is only the beginning. 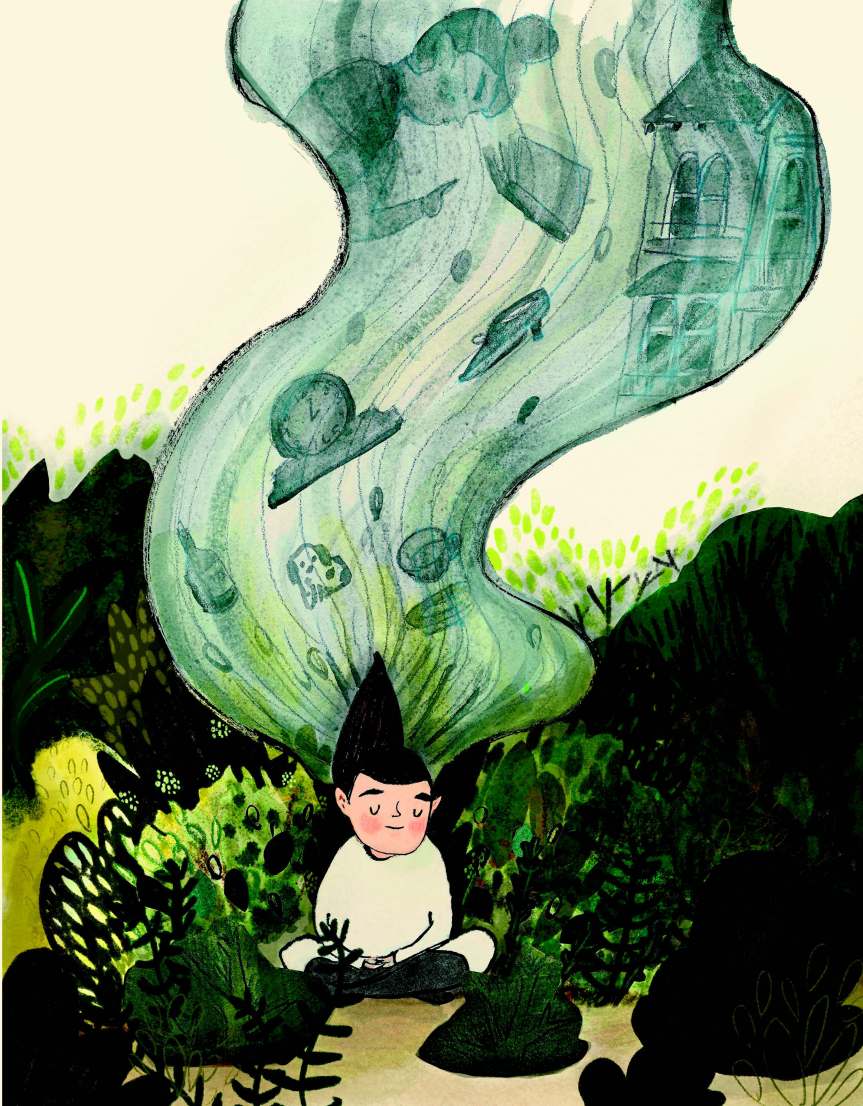 One thought on “Small is Grand”