This is My Dollhouse – Giselle Potter, Schwartz & Wade, 2016

Dolls are not asked and neither are kids.  Both categories of small people need larger beings to control them, but sometimes a doll or a child just needs to take matters into her own hands.

Ann M. Martin and Laura Godwin’s The Doll People, illustrated by Brian Selznick, is the first in a series about an ageing but still vital dollhouse family threatened by plastic competitors. (Some later books in the series are illustrated by Brett Helquist.) These dolls are pretty active and independent, considering that they live in a rundown structure with deteriorating glass panes and shabby wallpaper. Decades of human families have come and gone, their loyalty ending as soon as their children outgrow the need to control a miniature universe.  Anabelle Doll cynically comments, “History was made. Things happened. But inside the dollhouse, not much happened, as far as Anabelle was concerned.” Just as children need parents, the doll people need children to play with them.  Unlike children, they will never grow up and assume control or power over their own lives.  Or will they? In Martin and Godwin’s story, when confronted by the existential threat of the soulless Funcraft family, they take action. They will not succumb to the “doll state” of powerlessness, which Martin and Godwin wryly personify as a Barbie-like “fashion doll,” permanent and passive object of the male gaze:  “Permanent doll state?” asks Anabelle Doll, pointing to the 11 inch beauty queen figure, alluding to the inanimate status of a doll without independence or agency. 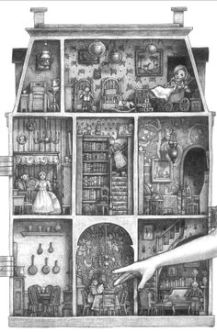 The end pages of the book resemble an actual doll house, labeled by Selznick “some assembly required,” a nice reminder of the participation required to suspend disbelief in dolls. Later books in the series, including The Meanest Doll in the World, similarly encourage readers with the suggestion that even toys have manipulative and bullying enemies but can survive nonetheless. Selznick’s grainy black and white illustrations set the dolls and the plot in  cinematic motion.  Some of them are two full-page spreads, as in his later works, The Invention of Hugo Cabret and Wonderstruck.

Rumer Godden, a prolific author for both adults and children, has written some of the most  enduring doll fiction, including The Story of Holly and Ivy, and The Doll’s House. Godden, who lived many years in India, narrated the tale of two Asian dolls, the Japanese Miss Happiness and Miss Flower, as well as Little Plum.  The novel, with both two tone and full color illustrations by Jean Primrose, tells the story of a sad and alienated British girl who had been raised in India, as had Godden herself, but has been forced to return to England.  While in Selznick’s work, the pictures bring the reader inside a book which resembles an actual dollhouse, in Godden’s tale the little girl, Nona, is committed to building a Japanese home for her dolls, for which detailed architectural plans are included within and at the end of the text, as are numerous footnotes about Japanese customs.  Nona herself is described as dark haired and pale, her skin “yellow from living so long in the heat.” In her identification with the people of India whom she has left behind, she has become a misfit within the English home identified with her insensitive and ethnocentric cousins. Nona is constantly absorbed in a book; she is, as her younger brother Tom complains, “a reading machine.”  When a package arrives in the mail with a great aunt’s gift of dolls, her cousin Belinda dismisses them with disdain as “queer.”  “They’re not queer,” replies Nona,” They’re Japanese.” So attached does she become to them that her mother, explaining to her that she may not bring them to school, advises her to take the dolls to school “in her head,” evidence of  fertile imagination. Ultimately, with the help of a kind bookseller and her younger brother’s skills, Nona succeeds in constructing an appropriate home for Miss Happiness and Miss Flower.

Given that the book was published in 1961, it is less than surprising that Nona must enlist her brother’s help by flattery and manipulation, since he is initially unwilling to participate in this female project. The book, which was out of print, has been reissued with new illustrations, an unfortunate trend in which publishers predict that more contemporary images will appeal to today’s readers.  The new edition has a bright cover with pink and blue jewel tones; the pictures within show a bit of nostalgia for 1960s girls’ fiction. They are attractive, but hardly seem an improvement on Jean Primrose’s delicate and colorful images which seem much more rooted in traditional Japanese art.

In Giselle Potter’s This Is My Dollhouse, a creative and self-assured little girl constructs her own “real little house” with no help from a brother or any architectural plans.  Through her own ingenuity, she transforms a cardboard box into the home for her dolls, a bottle and yarn into a plate of noodles, and a silver box with inserted pictures, one apparently singer Kate Smith, into a 1950s television set. These dolls just want to have fun, showing their leisured independence, as they “take the elevator up, up, up and swim in the rooftop pool in their bikinis.” The pool and elevator are a plastic bowl and a paper cup.  Their insistent “up, up, up” might be a nod to Kay Thompson’s Eloise and her thankless Nanny (“Eloise, you cawn’t, cawn’t, cawn’t.”)  Although the little girl’s artistic pride is temporarily dampened by a new friend with a fancy plastic dollhouse, much like the Funcrafts’ in The Doll People, both the friendship and her self-esteem survive. On the final page she is depicted closing the cardboard doors and looking “proudly at my dollhouse.”

Children still play with dollhouses and books about their residents continue to appear, although virtual dollhouses, a bigger threat than the shoddy Funcrafts, have arrived.   (Dolls enact children’s real-life dramas and do this within a small-scale setting with culturally specific details. They interact with humans but those humans sometimes step back and let the dolls take over. “Permanent doll state?”  Not such a bad fate for the residents of these books.