On July 4, I visited the Cloisters here in New York City, to see part of the wonderful new exhibit, Heavenly Bodies: Fashion and the Catholic Imagination. (The rest of the exhibit is at the Metropolitan Museum’s main location on Fifth Avenue.) Along with other visitors, I was struck by the overwhelming beauty and simplicity of a Dior wedding dress designed by Marc Bohan.  The bride mannequin had her back to the visitors, as she stood behind a rope in a medieval chapel.  A lovely little girl, visiting the museum with her parents and grandfather, managed to sneak away, crawl under the rope, and approach the bride.  She wanted to touch the dress and she did.  Who could blame her?  My husband associated the dress’s style with the BBC series Call the Midwife, but it was more austere. Perhaps if Madeline’s Miss Clavel had chosen to get married she might have worn it. Well, once the little girl was noticed her parents removed her before the security guard had to intervene. She went in an instant from looking fascinated by the beautiful dress to realizing that she had done something embarrassing and she started to cry.  Everyone there empathized with her, since we all had experienced similar terrors as children. 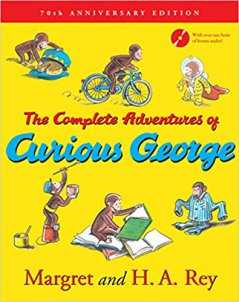 This reminded me of Curious George, without the gorgeous fashion.  If you remember, in Curious George Gets a Medal, the fourth book in the series (I wrote on the second here), the intrepid little monkey has a series of disasters that one wouldn’t think would lead to winning a medal. He floods the floor with soap powder, accidentally lets a lot of pigs out of their pen, and, finally, ends up in the dinosaur diorama at the Museum.  It looks so appealing, and George enjoys the attention, posing casually against a stegosaurus as onlookers admire him and take pictures. Apparently, they don’t know that monkeys and dinosaurs did not coexist.  But when George reaches up to pick some phony grapes from a palm tree, everything crashes down. You guessed it, he’s in trouble.

But, wait! Professor Wiseman (!), while initially angry with George, quickly realizes that he is the very monkey whom he has contacted by letter requesting that he join an important space exhibition. Professor Wiseman has beautiful handwriting as well as an official seal as director of the Museum:

“I have never met you but I hear that you are a bright little monkey who can do all sorts of things, and that is just what we need.

We want you to do something nobody has ever done before: bail out of a space ship in flight.”

What monkey, or child, could resist this mission, especially in the very year when the Soviets launched Sputnik?  To the satisfaction of every child, or adult, who has identified with the Reys’ creation, rather than facing humiliating, George gets a medal.

Brian Selznick and David Serlin’s new hero, Baby Monkey, faces similar challenges as he teeters on the bridge between being a small and  helpless being who has trouble putting his pants on, and a successful detective solving crimes.  Like Selznick’s other marvels (I have written on this genius’ work here and here and here), the book is a complete production.  Exciting and young child-friendly plot points appear in large and dramatic font.  Each page features Baby Monkey engaged in hyperkinetic and purposeful actions, some against a blank background and others embedded in film noir scenery. There are plenty of references in the pictures to intrigue adults, from painting, movies, and opera to allusions to Selznick’s other work. 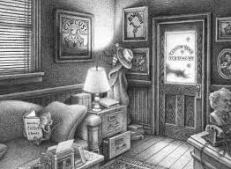 The end of the book has a helpful “Key to Baby Monkey’s Office,” identifying every image, as well as a fantastic Borgesian bibliography of unreal sources. When I first glanced at it, I was momentarily fooled! Famous Babies I Have Known: Bubbe Books, 1988: Is that an imprint of Kar-Ben Publishing?

When Baby Monkey solves his last case by finding his own mother, as loving and warm as the Mary Cassatt portrait in the little detective’s office, readers will feel as relieved as he does.  Or that little girl in the Cloisters when she went back to her family and realized, I hope,  that no one was mad at her.  I don’t know if Baby Monkey will be making further appearances in a library or bookstore near year: I hope he will.  Selznick and Serlin’s curious creation is worth a sequel.

One thought on “Monkey Is Ready for His Close-Up”