Book referenced:  The Complete Adventures of Curious George: 70th Anniversary Edition – H.A. and Margret Rey, introduction by Leonard Marcus, Houghton Mifflin Harcourt Books for Young Readers, 2001 (there is also a 75th anniversary edition with other add-ons, but it is hard to beat the Marcus introduction!)

Curious George occupies a distinct role in children’s literature. Although there are other animals who act like risk-taking toddlers, George has special qualities that make him competitive in the arena of experiments, bad consequences, and the reassurance by adults that his actions are not irreversible.

In Curious George Takes a Job from 1947, the little monkey is seemingly inundated with choices in, as my son-in-law has pointed out, the post- World War II economy in which jobs were there for the taking. (To help your kids learn math using fun and effective methods, you might try my son-in-law’s blog, “Teaching with Problems.”)

After busting out of his cage in the joint (zoo) and sleeping under an elephant’s ear (image), George finds gainful employment, first as a window washer in a mid-century high rise.  (He has already worked as a dishwasher, but this was only to pay off his debts after overturning a pot of spaghetti.)

With squeegee in one hand and a towel in the other, George enthusiastically cleans windows, through which he, and the reader, can watch a child being force-fed spinach and a man snoring.  Then he climbs through an open window and the fun begins as he turns an ordinary living room into Matisse’s jungle.

Unable to resist his curious impulse and his innate creativity, George, like his creator H.A. Rey, begins to paint.  The furniture, which has been covered with drop cloths, is transformed into a giraffe with a broom neck and smiling face topped with brushes, a rocking chair zebra, and a Chippendale chair with leopard spots and searching green eyes. 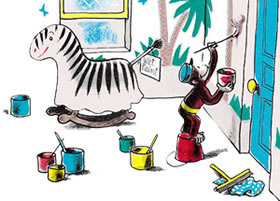 Although later scenes in the book show us an injured George as a hospital patient high on ether and ultimately a movie star, as a child, nothing topped the painting scene for me.  Rather than only getting into his typically destructive, if innocent, mischief, George is allowed to express his unbridled creativity.   The joyous image of him painting his self-portrait on a palm tree, the immersion in a totally new environment within a previously bland reality, and George’s total lack of expectation as two shocked house painters enter the room, captured the essence of George’s character.  The fact that it ends with an unsympathetic lady crying out, “Oh, my lovely room…Don’t let him get away,” and George’s perilous fall from the fire escape, couldn’t ruin the scene’s effect.

It’s always a propitious moment to revisit all the Reys’ work. The New Year of 2018 may find you looking for a new job, or just relishing the fun of your old job, especially if it allows you to turn chairs into zebras.