Everybody Bonjours! – Leslie Kimmelman and Sarah McMenemy, Alfred A. Knopf, 2008

There are an impressive number of truly high-quality children’s illustrated books about world geography and culture, presenting in colorful, informative, and sometimes humorous formats the world in all its variety to young readers. Even among these rich offerings, two books by Leslie Kimmelman stand out.  Paired with equally inventive illustrations by two different artists, Sarah McMenemy and Talitha Shipman, they introduce readers to the glories of France and Israel respectively, and to the reassuring return home that grounds these works as stories more than travelogues. (McMenemy has produced a series of miniature panoramas of cities for Penguin Random House, so she is experienced in this genre, to use a French word.)  Shipman has illustrated several other books, including the recent Judah Maccabee Goes to the Doctor, which emphasizes the importance of vaccination to frightened kids. (An article about the role of this book in combating anti-vaxers recently appeared in Tablet Magazine.) 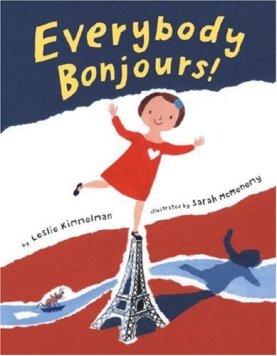 In Everybody Bonjours!, Kimmelman takes a linguistic risk by converting the French word for “hello” into a cross-lingual verb. Following blue and black illustrated endpapers featuring all the Paris landmarks, the narrator asserts that in Paris, “everybody bonjours.”

I admit that by doing this she undercuts a little bit the educational purpose of her story; children might close the book believing that the “s” at the end of bonjours is pronounced as in English, not silent.  I quickly got over this reaction because it makes the verse delightful!

Accompanied by pictures of soccer players and bakers are the phrases, “Everyplace, it’s all bounjouring/Players scoring/Batter pouring.” Under the Sacré Coeur Cathedral, a florist, an apartment building and a café, we learn of Parisians that “They bonjour/while sweeping floors./Doing chores/Eating petits fours.”  The pictures are simple, with bold colors, and feature a little mouse atop the Eiffel Tower, on the stairs to the Métro, and accompanying a little girl and her toy bear on the airplane trip home.

The images exude a casual joy as she meets people of all ages in everyday settings, and finally arrives home to an embrace from her grandmother. Wherever home is, her grandmother’s silver hair, wire-framed glasses, and bright pink dress make her just as chic as the French people the girl has just left. She closes her eyes and smiles.  Miss Clavel and Madeline come to mind.

Everybody Says Shalom follows a family, perhaps American, through their tour of Israel. Instead of a mouse, Gili the Gecko accompanies them on their visit to such historic sites as the Kotel (Western Wall), the Baha’i Shrine, the Chagall Windows at Hadassah Hospital, and the Biblical Zoo.  All locations are briefly explained alongside thumbnail sketches in the “Around and About Israel” pages that close the book.  Kimmelman’s rhymes are as offbeat as in her Paris book:

“Everybody says shalom,
In a shuk…
…or catacomb.
Two by two,
in the zoo.
Viewing tiny tiles of blue.
Munching dates,
lifting crates.

The most interesting decision by author and illustrator is to emphasize the multicultural aspect of Israeli life.  Characters have a range of skin tones and both Jewish and Arab Israelis are portrayed interacting in all the images.  Young and old people, as well as a child with a disability, also feature in the book.

The visiting family includes two children and a mom and dad; the mom appears to be Sephardic and the dad may be of Ashkenazic background.  Sephardic Jews include those originally descended from the Jews expelled from Spain in 1492, who later settled in such countries as Greece and Turkey.  The term is broadly used to refer to the many Jews who come from Middle Eastern countries and North Africa.  Ashkenazic Jews settled in Europe.  To those unfamiliar with these differences the pictures may not highlight this distinction, but the darker skinned mother and fair-skinned father looking into one another’s eyes as their children admire the giraffe couple, with a reconstructed Noah’s ark in the background, send a message of unity and harmony.

The most striking, and controversial picture, is the two-page portrayal of an outdoor souk, or market.  Arab merchants and customers, as well as Jewish Israelis of different religious communities, including Hasidim (members of a branch of ultra-Orthodox Judaism) shop together. A male and female pair of Israeli soldiers are engaged in conversation in the background.  She is blond; he is dark-skinned.  Neither is holding a gun.

Not only do I find this image to be encouraging, but, to those who suggest it is unrealistic, I would compare it to the famous vision of the book of Isaiah, the “Peaceable Kingdom,” depicting a world at peace where even the roles of predator and prey disappear. (Eva Zadrzynska and Tomek Oblinski’s wonderful children’s book on this theme is, sadly, out-of-print.)  Similarly, the picture of women praying at the Western Wall, where men and women are segregated, presents only the women’s section, and depicts it as larger than it is in reality.  I assume this is not an accident, but a statement.

Diversity, tolerance, and knowledge of the world: whether or not France and Israel are “on your map,” these books are wonderful places to visit with children. To Kimmelman, McMenemy and Shipman, bonjours, and shalom!