On April 19 of this year many of us celebrated Yom Ha’atzmaut, the birthday of the state of Israel. There are a number of children’s books about contemporary Israel, its history, and sometimes, controversies surrounding the social and political problems which continue to challenge, or plague, the country, depending on your perspective. I am a proud supporter of the Jewish state, as well as a critic of some of its policies, and I am always concerned about ways to present Israel to children with both loyalty and realism. One of my favorites is still Leslie Kimmelman and Talitha Shipman’s Everybody Says Shalom, though others are more problematic). 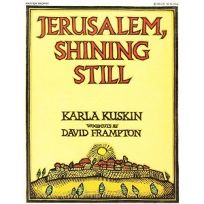 In 1987, which seems like such a long time ago, poet Karla Kuskin (1932-2009) and artist David Frampton collaborated on Jerusalem, Shining Still, a visually stunning and literarily ambitious tribute to the ancient and modern city of Jerusalem.  Although it is out of print, because this book takes so unusual an approach, I believe it is worth the effort to find and to share with children.

Kuskin has written a brief history of Jerusalem, interspersed with lines of poetry, although all the language of the book is suffused with poetic imagery.  She begins with an introduction which asks children to imagine Jerusalem in the context of time.  First, she suggests, picture one day, then “three hundred and sixty-five sunrises,” and then try to understand the four thousand years of Jerusalem’s existence.  Beginning with an acknowledgement of Jerusalem’s incredible diversity, symbolized by the fact that “Every morning sixty-four kinds of bread are baked here.” (Obviously, many more today!)

She then relates the Biblical tales of David and Solomon, the history of the Maccabees and the Crusades, and the Israeli War of Independence. Kuskin consistently stresses the importance of Jerusalem to different peoples, including Jews, Christians, and Muslims, and her tone is one of respect, even awe:

“(The Muslims) thought that Jerusalem was a special place, a holy city. Where the great temples had once stood they built two beautiful mosques on Mount Moriah.   And everywhere they built new buildings with Moslem (sic) stars and crescents glistening on domed roofs over the city and under the sky.”

Yet Kuskin’s awareness of multiculturalism, before it had become articulated as a central issue in children’s literature to the extent that it is today, will not make everyone happy.  She does not apologize for the existence of the Jewish state, stating that, after the Six Day War, “…the barbed wire and the sandbags were taken away and the city was on city again.”  She does not minimize the tragedy of the barbed wire and the sandbags, but she ends with optimism:

“The sky is very dark and high, and the moon is hanging above Mount Zion by an invisible thread. Its light touches the stones of Golgotha and Mount Moriah.  Its puts gold on the crescents and stars of the mosques, gold on the crosses of the churches.  It touches the Western Wall and turns the old, enormous stones pure white. Three thousand years have passed, and still Jerusalem shines. King David would be proud.”

David Frampton’s gorgeous woodcut illustrations give this book an artistic distinction that characterizes all his work. Using the minimal color palette of his antique style, we see gold horses and blue shields against a red background as the Mameluke warriors take the city from Saladin.  Their swords pointed symmetrically at three points on the city’s walls convey the same level of fear as a more literal image might do. A small gold David, slingshot hidden behind his young back, looks up innocently at a menacing Goliath in blue chain mail armor. Frampton’s pictures, steeped in artistic tradition, offer a parallel education for readers to Kuskin’s history in words.

I am sorry that Karla Kuskin, so lasting an important a figure in children’s books, is not here to celebrate Yom Ha’atzmaut with us, but Jerusalem, Shining Still, is shining still.

One thought on “Israel’s 70th Birthday”