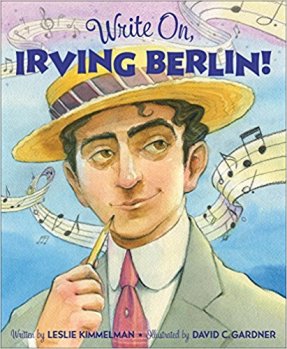 On his draft registration card from 1917, available at the National Archives, we read that Irving Berlin was from Mogilov, Russia (probably Mogilev, Belarus), that he was not married, and that his occupation was “Composer Music.”  That was to become an understatement of fantastic proportions.  In Leslie Kimmelman (about whom I have blogged before) and David C. Gardner’s wonderful new production, Write On, Irving Berlin, children learn how a poor Jewish immigrant from Russia who came to the United States to escape persecution became one of the greatest and most beloved songwriters in the history of his adopted country (so much so that there are THREE recent children’s books on him).  The book conveys both important information and joyous enthusiasm as it unfolds much like one of Berlin’s musicals, complete with happy ending.

Kimmelman pointedly describes the young Izzy Baline as a frightened little boy who has been traumatized by anti-Semitic violence in Russia, but is able to adapt to life in a land where political and religious freedom offset the poverty of crowding of New York’s Lower East Side.  Kimmelman’s narrative highlights Berlin’s persistence and ability to adapt rather than his almost superhuman gifts, allowing young readers to identify with his challenges and successes.  Understatement and simplicity bring our hero center stage:

“When Izzy was thirteen, his father died.  Izzy dropped out of
school and moved out of the family apartment.  There will be
one less person for my mother to worry about, he thought.

Izzy made money by – what else? – singing.

He sang in saloons.

He sang in the choruses of shows.

He sang as he waited tables in restaurants.”

There are many references to prejudice, including the nasty skeptics who suggested that a Jewish composer was not capable of understanding American culture enough to have written both “God Bless America” and “White Christmas.”  Kimmelman also adds historical background in explaining that Berlin insisted that integrated audiences of black and white soldiers in the still segregated U.S. military both perform in and watch his World War II musical, This Is the Army. A helpful author’s note, as well as an endearing list of the Kimmelman’s favorite Berlin songs and a short list of books for further reading provide a nice encore.

David Gardner’s expressive illustrations portray Berlin from childhood to old age. With his dark wavy hair, prominent nose, and conspicuous glasses, this is a portrait of the artist as a regular guy.  The versatility of Gardner’s images does justice to a thoughtful Corporal Berlin penning lyrics with one hand while he plays the piano’s black keys with the other, and also to a group of GI’s gathered around their jeep in the snow, listening to Berlin’s “White Christmas” on the radio.   He captures Berlin’s drive to create, not as an obsessive genius, but a person who just can’t stop writing.  In a two-page spread, Kimmelman details the quirks of his work process:

“He scribbled ideas on napkins and on the sleeves of his shirt.

He wrote songs in elevators and taxicabs.

He wrote songs in the bathtub.

He wrote all night long.” 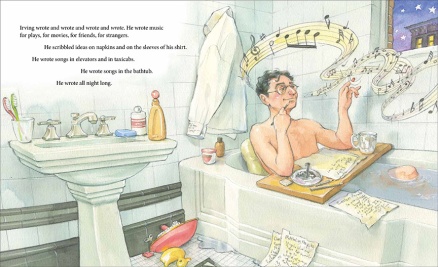 Gardner’s Berlin is seated in the bathtub, a ribbon of musical notes swirling around him.  This imaginative detail is grounded by real ones: a manuscript of “Blue Skies” on a writing table sitting across the tub, his white shirt hanging nearby with lyrics on the cuffs, a toy boat and rubber duck on the floor since the tub is full.  “Easter Parade,” “Puttin’ on the Ritz,” and “Cheek to Cheek” are also part of the scene, offering an opportunity to explain, recite, or sing to kids fortunate enough to be reading this book.

Write on, Irving Berlin should attract a large audience and should plan for a very long run.