Walt Whitman was born on May 31, 1819. We can prepare for his bicentennial by reading his poems, maybe one a day. If you already do that, introducing those poems, as well as the story of his life, to children, would be an act of the kind of patriotism that Whitman endorsed. It’s a good time to remind them that “barbaric” doesn’t have to mean ignorant and cruel, a betrayer of true American values, but the opposite.  As the poet wrote:

“I too am not a bit tamed, I too am untranslatable,
I sound my barbaric yawp over the roofs of the world.” 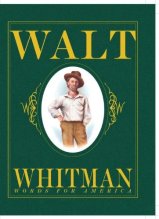 Walt Whitman: Words for America brings the experience of reading poetry to children and young adults who may have been cheated of it, or perhaps only given poems written in a contemporary idiom.  The book shows great respect for kids’ ability to immerse themselves in the past through the meticulous detail of the text by Barbara Kerley and the drawings by Brian Selznick, as well as to learn about the intersection of art and history. 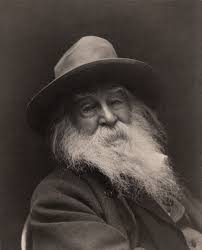 If young readers have ever seen an image of Whitman, it might be a photo of him as a bearded patriarch in a history textbook. That is who he would become, but Kerley and Selznick introduce us to a young printer’s apprentice with dirt on his face, intent on, literally, choosing the right words.  In fact, one of the most interesting features of this ingeniously designed book is the dialogue between the physical world, to which children naturally relate, and the literary and imaginative realm of words. 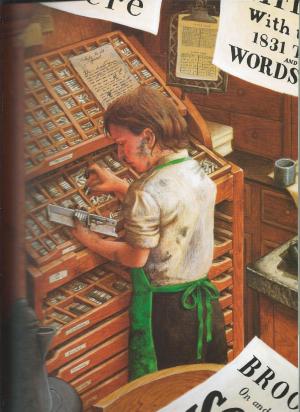 The opening page of the book announces the indisputable fact that “WALT WHITMAN LOVED WORDS” in large type divided among three lines.  In other words, if you don’t accept or understand that premise, the book will change your mind.  The rest of the page describes how much Walt loved actual words, sticky, inky, metal ones and the image they left on newspaper.  In fact, the two pages form a kind of visual pun. The young apprentice stands in front of a shelf taller than he is, carefully selecting letters from trays of neatly labeled fonts. Partially cut 0ff documents in three corners and a heavy looking coffee pot in the fourth one frame the type of cinematic picture for which Selznick is famous.

On the next page, Walt is also in love with words, this time the ones he reads to create pictures in his own mind rather than on a sheet of paper. We see him engrossed in The Arabian Nights while a terrifying green genie holds him in the palm of his huge hand.  Young readers also learn that Walt is a regular kid, delivering papers, running on the Long Island beach, and recording his earliest impressions on “a few sheets of paper secured with a ribbon or pin.”  The book alternates pictures that cover most of one or two pages with smaller inset images framed by white background.  The young poet making his first attempts to write “poems as free-ranging as his big, robust country” is shown as a small image of him seated at the table, the light from an oil lamp casting his shadow on the wall, complemented by a crescent moon in the window.  In contrast, the following two pages are almost covered by Walt as a young man, still writing in a homemade notebook, but facing the faces of enslaved people in a kind of unspoken conversation. Kerley writes, “He saw America from top to bottom, but his trip left him worried.” No wonder, as much of the rest of the book envelops the reader in the human dimension of the Civil War. Walt cares for wounded soldiers, writes letters to their grieving families, and expresses his deep love for President Lincoln.  In one incredible picture, Selznick transforms the horrific portraits of wounded soldiers, including amputees, captured by the new medium of photography, into sepia drawings.  Unmediated images of these men would be impossible to include in a book of this type, but Selznick’s translation of their experience, depicting them holding of plaques not only with their names, but with other words forming a poem, is perfect.

The history in the book is largely accurate, if, by necessity, simplified. One small quibble would be Kerley’s reference to Andrew Johnson’s leadership as part of a process in which “America began to heal.” Johnson was completely opposed to the Republican plan for Reconstruction; his “leadership” was an attempt to set back the clock and prevent progress for emancipated people.  The book includes detailed notes from the author and illustrator, as well as several complete Whitman poems. It is a beautiful and sobering introduction to Whitman’s work as we enter his bicentennial year.