If you have wondered how to explain to your child exactly what adult people, male and otherwise, do, since in the universe of children,  grown-ups may “go to work” to do unspecified “things” before returning home, here are two options, both from Golden Books ( (For a wonderful overview of Golden Books, including author and illustrator biographies, see Leonard Marcus’s Golden Legacy: The Story of Golden Books). 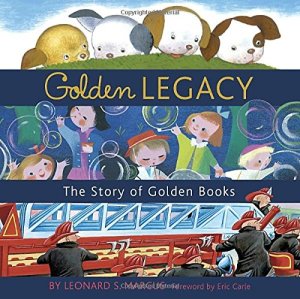 In the mid-century world of Janet Frank and Tibor Gergely:

Daddies do impressive physical labor, still of value in the America of 1953. They build planes, catch fish, and wear special eyepieces to repair a workshop full of analog clocks.
They grow food.
They drive taxis through crazy traffic and don’t get mad.
They are also artists, wearing a Picasso-like outfit of baggy blue pants and sandals, with messy half-squeezed tubes of oils paints cluttering their space.
They perform as opera singers.

They even sit at a crowded desk covered with books, exotic statues, and pots of library paste while wearing their pajamas and typing furiously, to produce “the books we read in bed each night.”  In this case, they seem to look much like Gergely himself.

A bit later in time, in Richard Scarry’s busy, busy world, people are animals and they are engaged every minute in productive activity. They are also sometimes inept and funny.  Some of the animals have gender, while others could be male or female:

They fight fires, one a pig with a colander on his head.
They give their children a bath (Mommy Pig).
They use wood pulp to make paper at the Foolscap Paper Company.
They deliver babies in a hospital staffed by rabbits, lions, and cats.

They mine coal in a way that seems unrealistically free of danger:  “Miners need fresh air/A fan blows out the stale air/and fresh air rushes in.”
They accommodate the very large family of Stitches the Tailor, a rabbit of course, with a multidecker bus for all. It has a carrot as a hood ornament.

Now you know what people do all day.  Your children finally will, too.

One thought on “Review Essay– Children Have Wondered: What Do People Do All Day?”