Author and illustrator Salvatore Rubbino has been introducing great cities of the world to your children since A Walk in New York, 2009.   Two years later, he went to a pre-Brexit Britain in A Walk in London. (Look for future posts on both books.)  His most recent, but I hope not his last, is A Walk in Paris. In each of his previous tours, a parent accompanied a child. Here it is a grandfather who enlightens a young girl about the history, architecture, and je ne sais quois of France’s capital city.

The cover of the book promises that you will find an “Unfolding Eiffel Tower Inside!” so you know that Rubbino’s  audience includes the kind of parent or caregiver excited by teaching children about  world cultures.  An obvious inspiration for this type of picture book is Miroslav Sasek’s This Is series portraying different countries and cities and the people who live there.  Originally published between 1959 and 1974, many of these have been recently reissued, including This is Paris, This is London, and This is Israel. 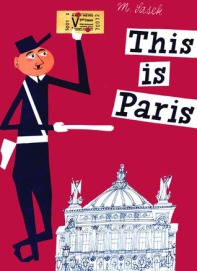 Sasek pioneered the format of colorful pictures and friendly informational text to convey both the unique aspects and fundamental similarities of global life.  (A recent biography of this fascinating artist is available).)

Rubbino’s books are a bit more personal.  The grandfather in A Walk in Paris guides his granddaughter around the city with humor and affection, and she responds with questions and independent observations.  In the first scene, he holds her hand as she climbs out of the Métro; she is already in the spirit of things in her French sailor shirt and blue capris:

“I wonder what
all those crates are for.
‘You’ll see,’ Grandpa promises with a smile.”

“Next we cross over to the Right Bank of the river.
‘Paris has style, don’t you think?’ Grandpa asks
as we pass a fancy salon.

I think there are lots of ways to wear your hair!”

The book creates a different dimension of the tour through parallel text in smaller font which explain Paris in greater detail.  They range from the relatively straightforward “The Marais was once a marshland. Now it is a fashionable part of the city, full of shops, cafés, and restaurants,” to the slightly more subjective “Parisian waiters are highly trained professionals.” 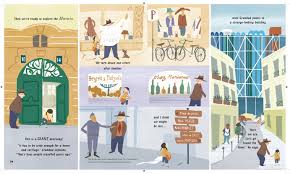 Rubbino includes not only the Cathedral of Notre Dame and the Pompidou Center, but other less grand parts of the city, including a street cleaner in his bright green uniform, and a shop window with a menorah under the sign “Beigels and Pletzels.” (This is not a misprint! Pletzel is a kind of Jewish flatbread sometimes compared to focaccia.) There are useful bits of French language: “Chic is another word for stylish,” and “The word souvenir also means a memory in French.” These may not be the most pressing words to learn but they are one of the idiosyncratic delights of Rubbino’s story.

The illustrations in A Walk in Paris are difficult to characterize because they contain so many different elements: accurate and detailed landmarks, a range of dark and light colors and tones, and lively faces combining caricature and realistic detail.  Some Parisians are shown as only blue-grey shadows providing background to the more fully realized characters.  They stand around the I.M. Pei glass pyramid at the Louvre and sit on the top deck of a bateau-mouche boat crossing the Seine.  Did Rubbino include these small generic figures to give readers a sense of how vast the city is, a place where you can see so much but never get to know everyone? I’m not sure, but they enhance the sense of cosmopolitan wonder is this wonderful book.

One thought on “Grandpa Explains the City of Light”