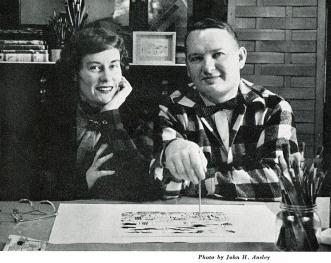 Beth and Joe Krush were a frequent presence in American illustration from the 1940s to the 1980s. They were both born in 1918; Beth died in 2009 and, if the most current information is correct, Joe is still living in the Philadelphia suburbs.  There is a moving film about him by director John Thornton, Joe Krush, An Illustrated Life.  Joe actually produced courtroom sketches at the Nuremberg Trials. He and his wife Beth are responsible for creating some of the most lasting images in mid-twentieth century children’s literature, for The Borrowers, as well as Sydney Taylor’s All-of-a-Kind Family Downtown, Elizabeth Enright’s Gone-Away Lake, Virginia Sorenson’s Newbery winner Miracle on Maple Hill, and many more (be warned that even when classics are re-issued with the original illustrations, publishers tend to commission another artist to do a new cover).  It would be impossible to do justice to the Krushes’ body of work in one post, so I am starting out “small,” with The Borrowers, and really small, with Arietty’s room.

There’s no accounting for taste in Borrowers illustrators. The original British edition of 1953 has pictures by Diana Stanley. They are reddish-brown, similar to engravings, and they approach Norton’s story in an entirely different way.  Her people have less defined features but dramatic, even exaggerated, expressions of fear, surprise, or resignation.  In the 50th anniversary edition, Leonard Marcus has a typically graceful and insightfully written introduction in which he compares Stanley’s illustrations with those of the Krushes. Marcus refers to the American illustrators’ pictures as more “flamboyant” and “giddily theatrical,” and they certainly are, in comparison with Stanley’s.

Maybe if I had grown up as a child in Britain, the Krushes’ pictures would seem to try too hard. It seems likely, however, that the preference for one illustrator over the others is more idiosyncratic.  To me, the intensely imagined and “produced,” (there Marcus’ comparison seems apt), settings for Norton’s tales of little people navigating their way in a larger world, were made complete by the Krushes’ drawings. Full of incredible detail and able to convey both the physicality and the feelings of the Clock family and their surroundings, I became mesmerized by the series. Arietty was a school age girl who longed for independence and adventure, which in the Borrowers’ world consisted of going out expeditions with her father, Pod, to find needed items, without being “seen.” That threat was not only visual; it was existential.  If big people found out about the Borrowers’ and learned where their missing blotting paper (carpet), matchboxes, (chests of drawers) and pins (knitting needles) had gone, the Borrowers’ would have to emigrate. 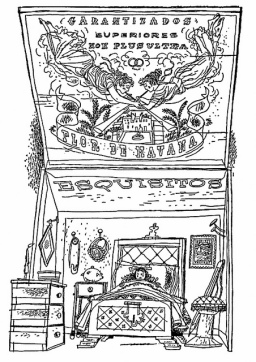 Arietty’s bedroom was made of two Cuban cigar boxes. I remember trying to reconstruct out of one of my father’s. Her bed was a hinged jewelry box with soft looking covers made of someone’s leftover fabric.  Next to it stood a very tall pencil, which she used to write in her folded paper journal.  Arietty is adventurous, but also loves to read from “those miniature volumes which the Victorians loved to print.” A postage stamp from an exotic location (no image of a British monarch) hangs on the wall, as does a safety pin/borrowing tool and small piece of glass for a mirror.  Arietty’s eyes are closed and her hands lie outside the quilt. Before falling asleep, she looks up at the cigar box ceiling, where gaudy paintings of angels blowing trumpets over a Spanish colonial fortress. The curling lines and shaded areas in these black and white drawings became inseparable for me from the story itself.

Other pictures are so full of objects taking up space that they are dizzying. One shows Pod proudly standing over a pile of his findings, thumbtacks, thimbles, watch faces and a box of “Mephisto” matches thrown together in such close proximity that the viewer isn’t sure where to look first.  If the illustrations seem light or frivolous, the two-page spread of the rat catchers and their dogs attacking the Borrowers through the floorboards will change your mind. The Krushes capture the sadistic joy of their conquest with pick-axes and poisoned bellows on the small family below.  It’s a good thing you can go back to Arietty’s bedroom, and to the Borrowers’ survival and further adventures in the series.  Sometimes less is more, but not in the fabulous illustrations of Beth and Joe Krush.

7 thoughts on “A Crush on Beth and Joe Krush Starting Out Small:”