Bedknob and Broomstick (combined edition of The Magic Bed-Knob and Bonfires and Broomsticks) – by Mary Norton, illustrated by Erik Blegvad, Harcourt, Brace & World, 1957 (original editions, 1945 and 1947) 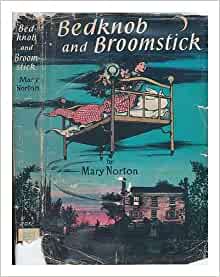 Many readers familiar with Mary Norton’s The Borrowers and its sequels may only know her earlier fantasy novels from the Disney movie which adapted them. The books might gain future readers if the planned stage production ever takes place. No, these enchanting and enchanted novels are not of the literary caliber of The Borrowers. The characters are far less developed and the magic is a bit creaky.  Still, they are worthwhile examples of the genre about children who have incredible adventures with the help of sympathetic adults, all the while circumventing the authority of ordinary adults who are boring authority figures.

The first novel tells the story of three children farmed out to live with an irritating old aunt in Bedfordshire while their parents remain in London. It seems that their mother has a job which requires her to send them off for part of each year. (It would have interesting to learn more about that job.).  Charles and Carey are the older, quasi-parental, children. Little Paul is still too young to have bought into society’s rules. Naturally, that means that he is the favorite of a secret witch, Miss Price, a spinster neighbor of their cranky aunt. When the children rescue this odd woman from a supposed bicycle accident which really involved her broomstick, she becomes their friend and involves them, somewhat reluctantly, in her witchcraft continuing education.  When they learn that a knob removed from Paul’s bed will allow them to travel across time and place, they first wind up in London, Paul’s choice to see their mother, and then in a South Seas island populated by hideously racist caricatures of “cannibals.”  The second volume is much better.  The London story involves parking the bed on the street, missing their mother, who is about as attentive a parent as the mother in Mary Poppins prior to the arrival of Super Nanny. As for the cannibals, the explanations required for children reading the book today make it hardly worth the effort.

Even in the deeply flawed first book, Miss Price is not without appeal.  She is an imperfect guardian, caring deeply for the children, but lacking patience and common sense.  In the second book, she is a reformed witch, having sworn to give up the spells and live by the normal rules of domestic life. Like many people with bad habits, she just can’t stick to her resolve, and soon she and the kids are off to the seventeenth-century, where they meet Emelius, a failed necromancer who can’t even believe that the profession for which he has trained is worthless.  The scene where he is almost burned at the stake will also require historical explanations for children.  There is even a romance, proving that bright and non-conforming women can also find love, even if they have to time travel to accommodate it.

Erik Blegvad’s line drawings are detailed, expressive, and elegant heirs to the best of the European tradition of children’s illustration. (Forget the cannibals.) These witty scenes perfectly mesh reality and fantasy and help to create a memorable impression of Norton’s quirky characters.  Mary Norton was fortunate in her collaboration with many distinguished illustrators, including Diana L. Stanley, the famous and controversial artist Waldo Peirce, who illustrated the original edition of The Magic Bed-Knob, and the incomparable Beth and Joe Krush. A voyage with Bedknob and Broomstick only requires a small and well-rewarded suspension of disbelief.