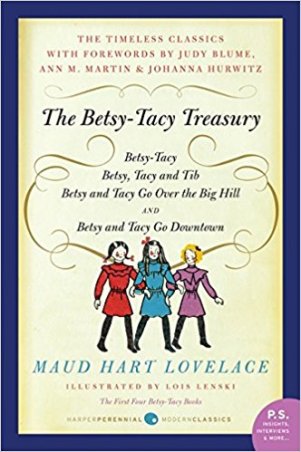 What is the source of the devotion that followers of Betsy, Tacy, and Tib, three girls growing up in a small town in Minnesota at the turn of the twentieth century, maintain into adulthood?  The series of ten novels, which take Betsy and her close friends from the age of five to young adulthood, seems to fill a nostalgic need to re-imagine childhood as a wonderful era almost free of conflict or suffering.  The friendship of the three girls, along with their family relationships, does suffer some minor detours on the road to near perfection, but that reassuring illusion alone does not characterize the series.

First, the very fact that these three girls constantly love and support one another, in spite of the fact that when they first all become friends, skeptics claim that three girls cannot be fair to one another without turning against one another. But the three girls will not be a part of that destructive view of female friendship: “But although so many people expected it, no trouble began with Betsy, Tacy, and Tib. The three of them didn’t quarrel, any more than the two of them had.”

Perhaps the sensitivity and flexible attitudes of their parents, the positive and accepting values of their homes, make these three girls defy stereotypical ideas about girls and women.  Betsy, the character modeled on Lovelace herself, longs to be a writer. Both her parents encourage her, expressing pride in her stories and poems. When they cannot afford a desk for her, her mother constructs one out of an old theatrical trunk.  But within the idyllic community of Deep Valley, not everyone is so enlightened. One part of their small town, Little Syria, is populated by immigrants in homes built by a disappointed eastern developer who discovered that this was the only market for his buildings.  Betsy, Tacy, and Tib meet a little girl named Naifi.  Although her clothing is different, they find this admirable, and they are equally fascinated that she writes “backwards” in “Syrian.”

One day in the schoolyard the warm and friendly interactions that are typical of the girls and their friends suddenly become a horrible display of xenophobic childhood cruelty.  Some aggressive boys taunt Naifi, mimicking her accent, pulling her hair, and yanking off her headscarf.  Betsy, Tacy, and Tib, along with their older sisters, intervene.  They do feel fear, but they are secure enough to know that they are right and the boys are wrong. They rescue their new friends, and then report the incident to their parents.  Betsy and Tacy live in small homes.  Tib lives in a grander house; her father is a professional while Betsy and Tacy’s fathers are salesmen.  Nonetheless, it is Mrs. Muller, Tib’s mother, who affirms their decision not to be “innocent” bystanders:

“‘It’s all right,’ said Mrs. Muller. ‘I’m glad Tib stood up for the little Syrian girl.  Foreign people should not be treated like that. America is made up of foreign people.  Both of Tib’s grandmothers came from the other side. Perhaps when they got off the boat they looked a little strange too.’”

Naifi and her family are Syrian Christians, escaping persecution by the “Mohemmedans” who are the Ottoman Turks who controlled Syria before World War I.  I hope this new in no way minimizes your respect for the multiculturalism and tolerance embedded in this story.  Betsy, Tacy, and Tib learn that Naifi and her family speak and write in Arabic, that they prepare different foods, such as kibbee, pita bread, and figs. They create traditional embroidery and play a flute called a munjaira.  All these significantly different customs in rural Minnesota are met with curiosity and respect by the girls and their parents. Most important, the Syrians in Deep Valley are eager to participate in American democracy.  Betsy, Tacy, and Tib’s parents reaffirm that their culture has intrinsic value and in no way disqualifies them as loyal Americans:

“’And they come for much the same reason that our Pilgrim fathers came. They want to be free from oppression and religious persecution.  We ought to honor them for it.”

Lois Lenski’s long and influential career as an illustrator of different American communities in her regional and “Roundabout America” novels imbued with dignity the lives of migrant workers, urban housing project residents, Native Americans, and coal miners.  Her black and white line drawings are steeped in traditions of American “primitive” painting, but also of her extensive formal training.  She illustrated the first four books in the Betsy-Tacy series. While her pictures may seem as dated in some ways as the shirtwaists and pompadours worn by the characters, they offer a deep reflection of the American ideal of unity that motivated her in her career.

There are many reasons to reread Lovelace’s series, or to read it for the first time.  The “Little Syria” subplot of Betsy and Tacy Go Over the Big Hill is only one, but it is representative of this chronicle, where girls think for themselves and do what they know is right.

One thought on “Betsy, Tacy, and Tib Protect Syrian Immigrants”