Many of us can remember a time when people of color were rarely portrayed in children’s books, and even more rarely portrayed sensitively or accurately.  Awareness of the need to faithfully reflect the world’s diversity in books for children has dramatically increased. Of course, people of color were always aware of that need. Historical accuracy, particularly when interpreting the experiences of marginalized groups, is one important part of that new commitment.  In 2015, Emily Jenkins’ and Sophie Blackall’s depiction of an enslaved mother and child in their picture book, A Fine Dessert generated enormous controversy, even anger. Even more contentious was the reception of the ill-fated A Birthday Cake for George Washington, by Ranim Ganeshram and Vanessa –Brantley Newman, which Scholastic actually withdrew from production. This book was based on the improbable premise that Washington’s slave was happy with his status.

I myself wrote an article for Jewcy in 2016 about A Year of Borrowed Men, a picture book that I believe grossly distorts the role of slave labor in Germany during World War II.  I was surprised that the book had received favorable reviews, and commendations specifically for promoting values of tolerance of peace, which it did only by erasing the historically irrefutable suffering of the victims of Nazism. 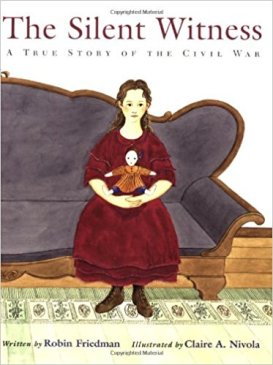 The Silent Witness is a picture book by Robin Friedman and Claire A. Nivola that specifically claims to tell a “true” story about the American Civil War through the perspective of one southern family, their little girl, and her doll.  It received favorable reviews, earning praise for its insight into how the lives of ordinary people, including children, were impacted by the Civil War.  In 2005, only thirteen years in the past, these responses were the norm and most readers might have found nothing to criticize about the book’s presentation of the War, which is unabashedly pro-Confederate.  Lula McLean and her family live an idyllic existence on their family’s Virginia plantation, “in a peaceful countryside dotted with cedars and pines.” Their lives are fruitful and productive, until the Civil War, which the narrative accurately reports began after Confederate forces fired on Fort Sumter.

There the accuracy ends.  Friedman’s explanation of the reason for this horrific conflict is one that has been completely discredited by legitimate historians:

“One of the main disagreements the Union and Confederacy had was over slavery.  The North wanted to abolish it. The South wanted to preserve its way of life.  When the South decided to  leave the United States and form a new nation, war began.”

If this rather neutral statement reminds you of Trump’s insistence after the violence in Charleston that there were good people on both sides, there is a reason for that. It is an example of the revisionism promoted by the South after Reconstruction ended, “rebranding” the Civil War as the War Between the States, in which two equally noble sides fought bravely for their “way of life.” The fact that one way of life was based on enslaving black people, exploiting their labor, destroying their families, and subjecting them to brutal oppression, is conveniently ignored.

The book is full of many more explicit comments showing compassion for the South and disdain for the North.  The suggestion that the book is a child’s perspective on the Civil War, therefore, is wholly inaccurate. We do hear her thoughts and the author develops the character of her doll as a “silent witness” to human suffering, but the suffering is that endured by white southern slave owners.  Here are just a few examples that should be shocking by current standards of respect for the realities of American history:

“Union forces blockaded the South’s ports to prevent staples like salt, soap, and medicine from  getting through.”

“In May 1864, the Union general William Tecumseh Sherman marched his sixty thousand troops through the South.  His soldiers set fire to farmhouses, bars, and fields.”

“General Sherman marched into Savannah and offered the city to President Lincoln as a Christmas present.”

Yes, the Union army blockaded the south. Yes, Sherman’s march to the sea caused great destruction.  The unmentioned, and apparently unmentionable, cause of the war is completely avoided in this tale, which is blatantly approving of an economy, culture, and political system that could only exist because of the unremunerated labor of people of African descent.

The snide “Christmas present” comment appears facing the only illustration in the book depicting an enslaved person, which is an astounding choice given that the family lives on a plantation, not, as many poorer southerners did, on a small farm that relied on their own family’s labor.  Claire Nivola’s illustrations are brilliant.  I originally bought The Silent Witness because I expected to see more of her stunning artistry, and this book is no exception.  In fact, the picture of the domestic enslaved woman transcends the obtuse message of the story.  The little girl, Lula, is seen standing on her toes on a stool in order to place the family’s homemade Christmas decorations. Her dress is bright red, while the holly and berries are green and red. Her baby sister plays on the floor with spools of red and green lace. Lula’s silent doll is seated on the carpet facing her.  Opposite the doll, the enslaved woman stands in the doorway. She is dressed in blue with a white apron and white head covering. She holds a broom, the only evidence of slave labor in the book.  The expression on her face is nearly blank. What might she be thinking as she lives through a War that will inevitably change her life as dramatically as the lives of the family, but in an even less predictable way?  Will she be liberated, or continue in slavery? She will certainly share in the economic devastation that the embittered slave owners feel is unjust as far as it affects them and their “way of life.”

Perhaps the most disturbing lines in the book are the respective descriptions of Grant and Lee: 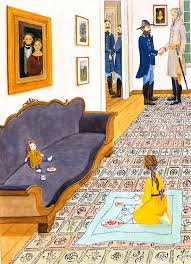 The myth of Robert E. Lee as a noble and honorable American, torn between loyalty to his state and his country, was deliberately created as part of the distorted myth of the southern “lost cause.”  After the terrifying events in Charlottesville, where the removal of a statue of Lee from Emancipation Park infuriated white supremacists, several journalists and historians used the occasion to inform Americans about the reality of Lee’s background and deeds, including his identity as an unrepentant supporter of slavery.  Friedman describes him as tall, immaculate, arrayed in the symbols of his profession.  Grant is “common,” not noble, as well as dirty and disheveled.  Any child reading his passage will receive a clear message about which leader merits our respect, and which side was motivated by aggression and greed.

The “Author’s Note” at the end of the book reveals a poor understanding of the Civil War. In the guise of validating the experience of an innocent child, the author reports that the Civil War brought many “firsts” to our nation, including the first federal income tax, the first military draft, and the first Thanksgiving. The Emancipation Proclamation, and the subsequent Reconstruction Amendments to the Constitution, are apparently insignificant in comparison.

I do not believe in banning books, withdrawing them from circulation, or forbidding children from reading them. I am sure that Robin Friedman wrote this story without any malice or intention of offending or misleading anyone.  The paperback edition of the book is still in print.  I would assume that a parent or an educational institution choosing to purchase this book would be prepared for a valuable opportunity to discuss this book with young readers.  Children suffer in war, and they are never responsible for the choices of their parents.  Their experiences deserve our respectful attention and empathy.  Misrepresenting history, particularly to the extent evident in The Silent Witness, is not an appropriate resource in fulfilling that mission.

2 thoughts on “The More Things Change, the More They Have Not Remained the Same”