The Yankee at the Seder – Elka Weber and Adam Gustavson, Tricycle Press, 2009

Don’t invite this “Yankee” to your Seder if, like me, you are celebrating Passover this year. If you do, you should be prepared for a serious discussion about race, history, and freedom. Maybe that is not a bad thing, but this book really strains the implications of a “teachable moment.” 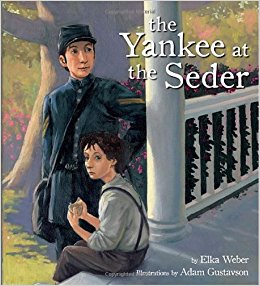 If you’re not sure what Passover (Pesach) is, it is the Jewish holiday commemorating and reenacting the Exodus from slavery in Egypt.  If you are not sure what the American Civil War was, it was a bloody conflict in which more than 600,000 soldiers lost to lives, in addition to the many who were handicapped, traumatized, and sickened.  The War was fought because a group of southern states seceded from the Union in order to preserve their “right” to own slaves, as well as the possibility of expanding slavery throughout the United States.  After Reconstruction ended, a long and successful movement developed to systematically deprive liberated black people of their rights by “rebranding” the Civil War as “The War Between the States,” in which two societies with equally legitimate cultures and economic systems fought for their freedom. Slavery was essentially removed from the equation.  The Yankee at the Seder is part of this corruption of history, even if, as is likely, the author did not view her picture book in this light.

The story relates the visit of a triumphant Union soldier, Jewish, to a Jewish Confederate home, where is invited to participate in their Seder, or festive ritual meal.  The book is narrated from the point of view of the southern boy, allowing him to describe with disgust the “War of Northern Aggression.” Had the author put this child’s perspective in context, the book would be very different, perhaps a window into the mind of a child inexorably drawn into adult conflict without understanding why.  However, this book completely fails to accomplish this task. Instead, the southern family is noble, the patriarchal grandfather is wise and generous, and the family’s “housemaid,” (enslaved person), only mentioned once, is silly and ignorant. No wonder she does not seem to mind her servitude. Her only response to the guest and the holiday is  “…shaking her head at our porkless kitchen,” and “…actually laughing out loud before leading Corporal Levy upstairs to the guest room.”

During the Seder, there is one discussion of slavery, raising hopes in the reader that Weber is going to reveal the ironies of a family celebrating freedom while enslaving black people.  The Yankee soldier and the Confederate father begin to argue. The father angrily tells his children that freedom from bondage, as described in the ritual, means that “…no man needs to submit to the tyranny of an evil government.” Corporal Levy, calmer, perhaps because he is the victor, contends that Passover is, in fact, “…about how no man wants to be a slave and about how wonderful it is to be free.”  At that point, just as if it seems that young readers will learn to appreciate the paradox of this Seder, the wise grandfather defuses the tension by claiming that the Hagaddah, the book containing the Passover ritual, is itself full of disagreement. So it seems that all disagreements are potentially equally valid, event those over whether it is acceptable to convert human beings into property. Having avoided this uncomfortable dialogue, everyone is happy. The Yankee gives the little southern boy his hat as a gift.

What are the worst aspects of this book? First, the author emphasizes its value as history, providing an afterword entitled “The Real Story” and citing the historians with whom she consulted.  The final page of the book, “Passover, the Festival of Freedom,” manages to completely omit any mention of American slavery, the sufferings of enslaved people, or the dreadful nature of the fact that a minority of American Jews supported the Confederacy. (Many more lived in the north because Jewish Americans largely lived in more urban areas and fewer were involved in agriculture.)  The lesson of The Yankee at the Seder, in case you missed it, is the following: “I hope that this book makes it a little easier to focus on the things that unite us, and not on the things that divide us.”  When those “things” are such essential human and Jewish values as freedom, human rights, and care for the oppressed, they evaporate in the face of a simplistic vision of “unity.”

Most incredible is the way in which Weber succeeds in avoiding the most central link between Passover and American slavery.  Originally, African peoples enslaved in the American colonies had Christianity either presented to or forced upon them. Eventually, many came to embrace that faith, and to interpret the Exodus narrative from the Hebrew Bible as central to their experience of enslavement, and, ultimately to their liberation.  Did the author never learn, even in grade school, about this process, or about the African-American spirituals that gave voice to it? Did the phrases “Go down, Moses/way down in Egypt land/tell old Pharaoh/ to let my people go,” never cross her mind as she composed her book about “expressing and celebrating freedom” and the need for people to “overlook differences?”

I know that this book was published nine years ago. As I addressed in an earlier blog entry about a similar story, one without a Jewish setting, authors and publishing houses for children’s literature have made progress towards recognizing the need for diversity and historical honesty in their work.  I also agree that a presentation of an American Jewish dilemma of the time, that Jews fought on both sides in the Civil War, would be a promising subject for a children’s book.  Jews fought on both sides in the Civil War, with some supporting but more condemning American slavery.  At a minimum, it would have to present the lives of enslaved people as more than a brief and ludicrous incident of comic relief, as this book does.

The illustrations by Adam Gustavson are dramatic and expressive as they attempt to convey the disappointment and excitement of the boy, as well as the objects and setting of the period.  It was difficult for me to separate their impact from the story.  Gustavson has illustrated other lovely works, including, ironically, a picture book biography of the great American leftist singer and activist, Pete Seeger.

Mr. Seeger, famously, stood up for the rights and integrity of all people, including Jews, people of color, veterans, environmentalists, and workers.  A rousing chorus of some of his interpretations of songs of liberation might be a nice addition to your Seder.

One thought on “Do NOT Invite This “Yankee” to Your Seder”