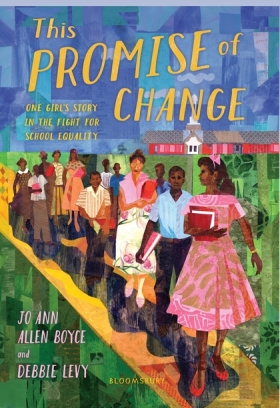 Award-winning author and poet Debbie Levy (see my interview of her here) has collaborated with civil rights veteran Jo Ann Allen Boyce to tell Boyce’s story of being a young pioneer fighting to desegregate the high school in her home town of Clinton, Tennessee.  The book is a symphony of poetry and courage. Allen Boyce and Levy use verse, historical documents, and Boyce’s memories to recount the unforgettable pain and frustration, as well as the personal strength and triumph, of her struggle. The result is a riveting account of how unjust laws and deeply ingrained prejudice impacted the lives of African-Americans, as well as a glorious tribute to language and its power to both articulate and change experiences. (also see reviews of Levy’s work here and here)

Although the court-ordered desegregation in Clinton took place in 1956, before the Little Rock Nine and before Ruby Bridges attended a white school in New Orleans, many fewer Americans are aware of this timeline.  In an extended “Epilogue,” the authors reflect on the reasons for this omission.  The lives of African American residents of the town, as in the rest of the segregated South, were characterized by a kind of double existence, a precarious balance between friends and enemies, their own supportive communities and white neighbors blinded by prejudice.  Some of these neighbors, who interacted positively with Allen Boyce and her family, became seemingly deranged by hatred when compelled by law to surrender a small part of the power and control which they had enjoyed for generations by allowing African American students to attend school with their own children.  The authors capture the psychological destructiveness of this situation by alternating chapters in which Allen Boyce describes the events and individuals of this paradox.

A visit to the supermarket by people of color was governed by elaborate rules, in which

“We do not enter that aisle
while the white person is contemplating
baked goods.
This is not a bread rule, you understand;
it applies to milk and scouring powder, too.”

The narrator’s voice is seemingly detached, as when she describes the similar process by which African-American women could be permitted to try on hats at a milliner’s without contaminating the goods for white customers.  In other chapters, Allen Boyce expresses confusion, rage, faith, and determination.  Every attack becomes an indelible memory: “But you can’t unhear/what you hear,” when a child in a store calls her a filthy name. There is significant nuance to Allen Boyce’s reactions.  White people may show compassion under limited circumstances, but fail to support integration because of their total investment in an unjust system.  The book is not populated only by heroes and villains, although both play a role, but also by failed human beings who support racial inequality every day when, like President Eisenhower, they only reluctantly admit a need for some change.

The range of poetic forms in the book is breathtaking.  In her notes, Levy describes this choice as a tribute to Allen Boyce’s voice, developed by a mother who insisted on the importance of using English correctly and eloquently.  There is free verse, but also sonnets, ballads, haiku, villanelle, and other forms.  These poems are not meant to amaze the reader with technical virtuosity; each one is adapted to relating a specific part of Allen Boyce’s experience.  There is irony framed in rhyme as she comments on the temporary calm in the town enforced by the presence of soldiers:

The precision of “Do the Math” uses equations and an acrostic to turn chaos into controlled forms, while the sonnet sequence of “Down the Hill” elevates her father’s choice to move the family to California:

“Abandoning the cause that I embraced,
retreating from a stand I know is right.
The risks I took, the dangers that I faced –
what purpose served if I don’t stay to fight?”

An extended section at the end of the book includes the authors’ explanations of the book’s genesis, historical background, lists of additional sources, photographs, and a timeline, making This Promise of Change an excellent choice for both individual reading and classroom use. Jo Ann Allen Boyce and Debbie Levy have succeeded in combining artistic distinction and historical truth in this outstanding work for young readers, caregivers, and educators.

One thought on “Struggle, Change, and Poetry”