First, I Dissent: Ruth Bader Ginsburg Makes Her Mark appeared in 2016, winning a well deserved Sydney Taylor and National Jewish Book Award, among other honors. Then, only one year later, Ruth Bader Ginsburg: The Case of R.B.G. vs. Inequality followed. It was cited as a Sydney Taylor Notable Book, and also as a New York Times Best Illustrated Children’s Book As far as I am concerned, there can’t be too many children’s books about this powerful and courageous female opponent of injustice.  An article in the New York Times by legal reporter Adam Liptak refers to her as a “rock star” and describes the grueling schedule she maintains, one that would challenge someone twenty years younger. Each book is a thrilling in its overt feminism, its frank acknowledgement of antisemitism, and its beautiful art.  Winter and Innerst’s work has a somewhat more detailed text with more complex explanations, but the differences are minor; both works would be suitable for readers in elementary school and their awed caregivers.

I Dissent opens with carnival-style lettering making the point that dissent has been the essence of Ginsburg’s life and career. We see young Ruth and the older Ruth in her justice’s robes, each proclaiming her profound objection to injustice and inequality.  Yet this does not, author Debbie Levy reminds us, make her “disagreeable.”  Girls and women who speak out are heroines, not annoying pests or witches.  We learn that Ruth grew up in an immigrant neighborhood and was entranced by books from a young age. One of Elizabeth Baddeley’s pictures shows Ruth seated in front of a shelf in the public library, reading about heroines real and imaginary, whose images form constellations in her mind.  There is no pulling any punches about prejudice, as a boldly lettered sign, “No Dogs or Jews Allowed,” keeps the Bader family from a hotel on their vacation. The facing page depicts other signs shamelessly excluding black and Hispanic people. Ruth is taking it all in. She is angry, but her anger is always focused, whether in her protests against teachers who force her, a lefty, to write with her right hand, or the obligatory cooking and sewing classes to which she is subjected.

When Ruth goes to college, she meets her ideal mate, Martin Ginsburg, as committed to women’s equality as Ruth is.  One beautiful picture shows nighttime in the Bader Ginsburg home through a blue background of semi-darkness. Martin is cradling their infant daughter while Ruth sits, law book and pen in hand, studying. Both parents are quietly smiling.   The book portrays Ginsburg consistently, mounting a strong argument that is not patronizing or simplified. Prejudice is wrong. Strength should be expected from both men and women. Both men and women are entitled to fulfilling professional lives and warm family lives.  All oppressed people deserve advocates.  The facial features and physiques of the characters are not idealized, so they further affirm for children how ordinary heroism can seem from the outside.

Jonah Winter and Stacy Innerst’s approach is similar to Levy and Baddeley’s: acquaint young readers with Ginsburg’s compassionate activism and defiance in the face of outmoded conventions.  Winter uses the premise of framing a legal argument, with such phrases as 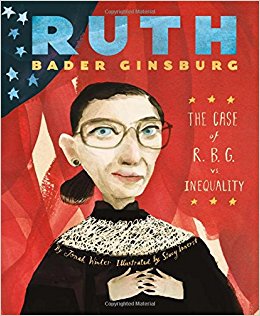 “We now offer into evidence: Anti-Semitism experienced firsthand by Ruth – a sign outside a resort in Pennsylvania, seen from her parents’ car.  It said: NO DOGS OR JEWS ALLOWED.  This happened right here in America.”

This book also documents the young Ruth’s passion for books, her success as a student, and her grief at her mother’s early death.  Martin Ginsburg is also her staunch defender and soulmate, “…different from any boy she’d ever met – he liked that she had a brain.”

Ginsburg’s involvement with her career does not imperil her status as a loving husband and mother.  She stands up to male colleagues who denigrate women’s rights. In fact, both books feature dramatic illustrations of petite and assertive Ginsburg facing a row of male Supreme Court justices. In I Dissent, she is pictured bravely arguing her case in front of the Court.  In Ruth Bader Ginsburg, she has joined them as their colleague. Innerst wryly shows her reading clearly from a document while the men behind her look skeptical; one justice is yawning.

It may be a testament to Ginsburg’s iconic status that both books were published within so short a time, especially given their extensive similarities.  The illustrations are different, with Innerst’s red or mauve backgrounds in many scenes, and segments of text posted on legal pads.  One such unforgettable picture has a very pregnant Ruth with her trademark big glasses looking with disgust at a reduced paycheck:

“Exhibit A: It was her
first job out of college,
right before Law school.
Her boss demoted her
and slashed her wages –
because he saw she was
pregnant.  This was a
common practice.
What could Ruth do?”

Thanks to these two books, we know what she could do.  The overlapping information in each book, as well as the specific approach of each illustrator, makes them truly complementary.  Read both of them with your children. The lesson they impart about empowering women and standing up for justice will be a memorable one.

4 thoughts on “RBG for Kids”