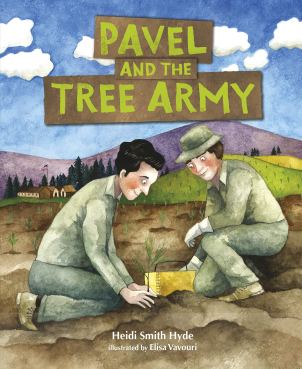 Before there was a Green New Deal, there was a New Deal that was green.  President Franklin Roosevelt and his advisors established the Civilian Conservation Corps, a program through which American men between the ages of seventeen and twenty-eight could earn a living during the Great Depression and contribute to a far-sighted commitment to conserve natural resources at the same time. Participants engaged in a variety of tasks, including flood control, fire prevention, and the prevention of soil erosion. Heidi Smith Hyde and Elisa Vavouri have given young readers, as well as caregivers and educators, a fictionalized glimpse at a lesser-known fact about this program: a number of the participants were Jewish, and some were new Americans.

My first thought on opening this book was that its very existence is a wonderful idea. There are many excellent children’s books about Jews in the American military, Jews as crusaders for civil rights, Jews in the arts.  Here is a focused look at one specific New Deal program, with a legacy of overwhelming importance today.  Hyde and Vavouri tell the story of Pavel and Anatoly, two Jewish immigrants from Russia whose rabbi has told them about the outstanding opportunity awaiting men willing to work hard and earn a living, at the same time helping the country to which they felt gratitude and loyalty.  Even imperfect English skills would not discourage their enrollment in the corps.  In one two page spread, we see a line of “hungry people, hoping for a scrap of bread or a bowl of warm soup,” blending into an image of Pavel’s rabbi on Shabbat, informing him hopefully about the scope of the program. Soon the familiar urban scene changes to a much lonelier one, where Pavel and Anatoly contemplate “a dry, dusty land dotted with wheat fields and farmhouses.”  The exciting idea has become a much more difficult reality, as some of their fellow workers deride their foreign accents and question their ability to be productive members of a team.

The book achieves a good balance between confronting reality and offering hope.  Pavel, Anatoly, and the other immigrants feel the sting of intense prejudice against Jews, Italians, or anyone who did not conform to their narrow view of America held by some of the men: “You don’t belong in the Civilian Conservation Corps.  You’re not real Americans. I bet you don’t even know America’s national anthem.” Suffice it to say, in addition to digging trenches and cutting timber, Pavel and his friends pursue a new goal with nothing less than total attention: learning to sing “The Star-Spangled Banner” correctly, and with all the fervor of someone born under a dictatorship who could now enjoy the promise of democracy.

Hyde and Vavouri’s presentation of Jewish religious practices in the American military is quite realistic. The men do what they can to retain some observance, such as resting and singing on Shabbat while others go to the movies. At the same time, they are clearly shown eating chicken, mashed potatoes, and apple pie with the other corps members.  Today, when divisions between American Jews based on affiliation and level of practice have become so rigid, it is refreshing to see a book for children that describes a time when things were different.  The books reinforces Jewish teachings about ecology in an unobtrusive way, as when the kind sergeant points out to an insecure Pavel that, just as the saplings need time to take root, he and the other immigrants will also become rooted in the land. It is, unfortunately, not a coincidence that none of the book’s characters are African-American.  The CCC, like other New Deal programs, offered limited positions for people of color, and was segregated by race. This fact offers an opportunity for discussion when reading the book. 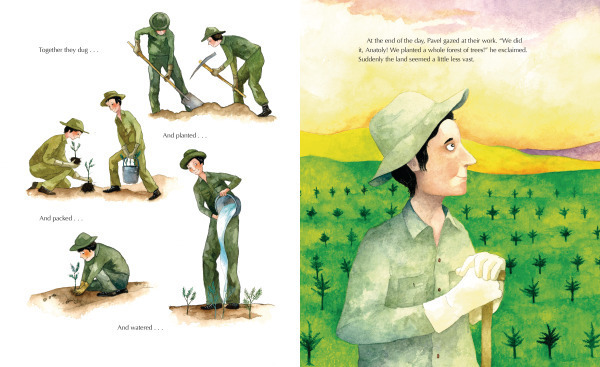 Vavouri’s color palette reflects both nature and the Corps, with the green of the land matching the workers’ uniforms, along with a blue lake and a roaring orange campfire.  Then there is the flag: red, white, and blue.  Pavel and the Tree Army offers children a vital lesson in American democracy for today.