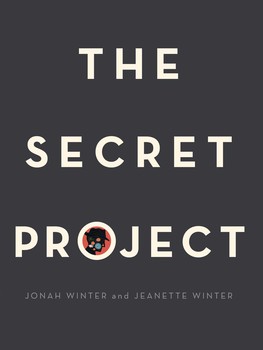 In a recent forum in the New York Times, author Jonah Winter finally had the opportunity to express his frustration at the swerve in responses to his book The Secret Project. Initially praised enthusiastically by The Horn Book, Kirkus Reviews, School Library Journal, and other publications, the book became the focus of attacks by some readers who condemned inaccuracies in its presentation of the Native Americans who lived and worked in the region of the Project.  I am not writing to defend the book, because it doesn’t need my defense.  I would like to post an appreciation of its immense value as an informational book which also has a mythic dimension, and as a beautifully realized artistic production.

The idea of writing a picture book about the Manhattan Project for young readers is fraught with risk.  How can one present the history of a mission designed to save lives through massive destruction without merely terrifying? Author Jonah Winter and his mother, distinguished illustrator Jeanette Winter, bring readers to the New Mexico desert, a land of beauty and rich traditions, including of the native peoples who had lived there for generations.  The artist Georgia O’Keeffe also makes a cameo appearance, although she is named only as “an artist,” as if to emphasize the collective nature of the description.  Then come the scientists.  A school has been closed to make way for them, and local workers come to the new site without any knowledge of what is taking place there. Winter and Winter depict their dedication with text and images that match one another in mystery.  “What they are working on is so secret, they cannot even call it by its real name,” one line intones beneath a dark building with windows and door peopled by silhouettes.  Other pictures show visions of splitting atoms above a scientist’s head, and a group of “shadowy figures,” gesturing to one another in profile below a complex set of equations in a cloud.

Readers learn a minimal number of facts; more information appears in a detailed “Author’s Note,” which is stunningly placed as black font against a grey background, and a black border of mourning. There is also a list of further resources.  The notes and resources complement the text itself; this is an informational book, but one which resembles a work of theater or a film, as it creates an atmosphere where “Crouching down in their bunker, the scientists prepare themselves for something…so earth-shattering…it is hardly even imaginable.”  The final pages of the book visualize the tension and the unprecedented destruction of the mushroom cloud, followed by blackness.

Informational books are not the last word on a subject, but, especially for children, often the first.  There are many resources available for opening the discussion of science, technology and society, the morality of war, and the role of civilians during military conflicts. If you expect The Secret Project to be a comprehensive history of the Manhattan Project, or a sociological study of the different ethnic groups and socioeconomic classes impacted by its presence in their community, you may be disappointed. Anyone who recognizes integrity and artistic brilliance in books for children will not be.