Esmé Shapiro, illustrator of Kyo Maclear’s Yak and Dove,  is back with another story of improbable friendship, this one steeped in fairytales and fantastic images from a child’s dream world.  How can the comforts of your own home seem strange and puzzling to others? What kind of creature has a “plumpooshkie” for a pet?

How do you braid your trees?  Alma’s world of mysterious houses and crazy foliage offers an inviting setting where Shapiro plays with reader’s expectations, turning them into something new. Be ready to pay attention. As any child knows, “…beasts do not always go away when you close your eyes.” 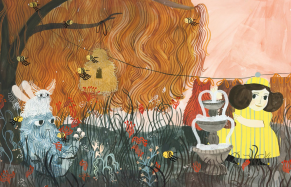 Beauty and the Beast, in all its different incarnations, hovers over this book. If you expect a rough and hair covered almost human to imprison a beautiful girl, you will find that different rules apply here.  Alma, in spite of her beautiful and soulful name, is a short monster whose long noodle-like locks and big expressive eyes bring to mind Charles Adams’ inventions as well as Jim Henson’s, but also the beings who populate children’s dreams and fears.  Don’t worry; she is entirely friendly and strangely familiar, waking up in a bedroom with walls covered in kids’ art, brushing her teeth, and feeding “butter breakfast tulips” to the pet with the Russian-sounding name. Then, a strange and relatively bald person shows up, hiding behind a fountain of flowing hair. 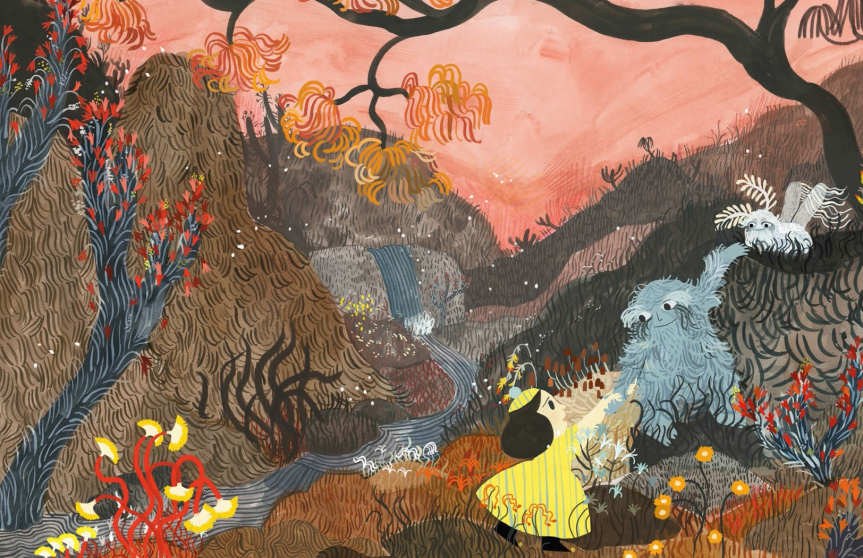 As you remember, in many of the versions, from eighteenth-century France to Disney, Belle is held hostage by an aggressively male Beast who prevents her from returning home. Here the “beast” is a sad little girl who has lost her way in the woods. Alma empathizes with her completely, asking herself “Where would I be without my home?”  Alma patiently leads her new companion back to her origins, heroically guiding her.

Shapiro has written and drawn a setting like no another, one defined by either the abundance or lack of hair.  Woods, cliffs, and glens, beards, mustaches, and a willow weeping long, brown tresses form the stark contrast to the Beast’s home.  After Alma gets over her shock at “bald” houses and trees that cannot be braided, she adjusts to a new routine. She even learns that the Beast has a name, one oddly similar to her own.

Shapiro’s choice of hair as the center of her tale will not seem especially strange to children.  Monsters are covered with it, even nice ones.  Alma’s perception of her friend as hairless will be a little less familiar to them, but understandable from Alma’s point of view.   Mainly, the wild and lush setting of hair as plants and plants as hair sets the book apart from other retellings of Beauty and the Beast.  Alma and the Beast’s two bedrooms bookend the story, with Alma waking and the Beast welcoming sleep. Children want both consistency and adventure, and they will find it in this imaginative celebration of difference. 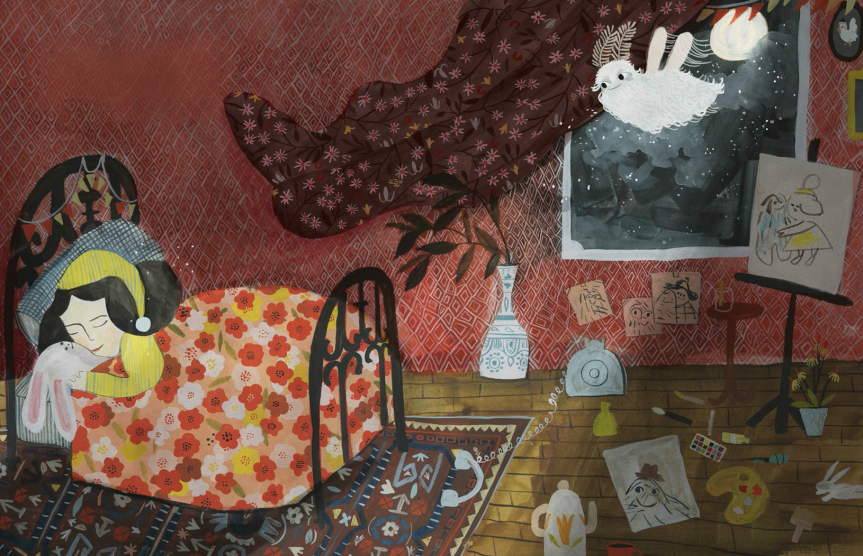 One thought on ““But How Do You Braid Your Trees?””