I recently wrote about Sue Fliess and Claire Keane’s A Fairy Friend, in which a fairy-loving little girl needs to learn that even fairies with the most wonderful and custom-designed habitats need to fly away and move on. In Love Is, written by Diane Adams and illustrated by Keane, it is not fairies, but an urban-dwelling duck, who teach this valuable if painful lesson, again, with a comforting ending.  An adorable city child acquires a duckling, which exits the open gates of a park, along with a butterfly, which I think symbolizes freedom.  The girl puts down her jump rope, backpack, and lunchbox, and picks up the duck, and she is in love.  The text rhymes, characters’ faces are expressive and exaggerated, and the domestic and outdoor scenes are full of unforgettable details and bright highlighted with bright colors.

The girl is utterly loyal and caring towards her new friend.  She shares sunflower seeds while watching t.v., and trains the duck’s little muscles by allowing it to climb the stairs in what may be a rather grand townhouse.  When the duck flies out of the bathtub, the girl learns that it is “ready for a bigger pond.” The season turns to winter, and girl and duck gaze out the window at a flock of birds flying over a bridge.  Eventually, the duck paddles off with members of its own species and the girl is bereft. We see her grieving over a solitary snack of sunflowers, “reminiscing” by drawing the duck, and “wishing things could stay the same,” as she eats breakfast alone and realizes that things are never going to be the same again.

Remember the fairies who returned, as a reward for allowing them to fly away?  The little girl has recovered from her deep depression and is seated on her beautiful tree-lined street, that same butterfly poised on her finger.  Now that she has reached a level of acceptance and understanding, the duck returns. It still loves the little girl, and how has a bunch of babies.  Everyone is happy.  Like the fairies, the duck has returned only because the girl was ready to move on. 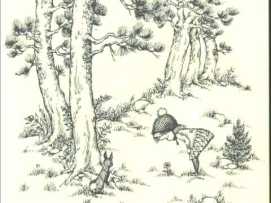 If you remember the classic mid-century books by Joan Walsh Anglund, you may see something of an homage here to Love Is a Special Way of Feeling.  That book’s examples were not limited to ducks, or even animals.  A mom in a Victorian nightgown represented unconditional love, as did a boy feeding a lost cat, a girl on a school playground noticing one forlorn kid sitting on a log by himself, or another girl studying a flower no one else had seen.

In a typical Anglund book, the only features on people’s faces are eyes, always two small black dots, so she had to convey a lot with other elements in the picture. The girl in Love Is has huge eyes, but also a nose and mouth, and a much more fluent range of gestures. Anglund’s characters are quiet, but social.  Love Is a Special Way of Feeling maybe acutely sentimental, but there are lots of people interacting with one another.  Love Is seems more like a parable; there is no one but the girl and her duck, and that single butterfly.  The urban setting is more contemporary than the pine trees and fireplaces of Anglund’s book.  Still, both books aim for timelessness and they are unapologetic in that design.  You might like to read them together.

One thought on “Wishing Things Could Stay the Same”