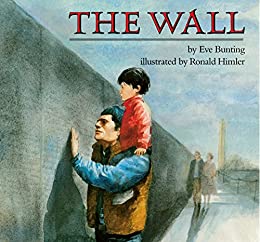 It’s inherently difficult to choose picture books explaining Memorial Day. While Veterans Day honors all the men and women who have served in the United States military, Memorial Day is dedicated to those who gave their lives.  Then there is the issue of conflicts, such as the Civil War and World War II, for which it is relatively easy to explain to children, in the words of movie director Frank Capra, Why We Fight.

Eve Bunting and Ronald Himler’s The Wall is a sad but hopeful story about the eloquent Vietnam Veterans Memorial, enshrined in American memory as “The Wall.”  It does not explore the reasons why the United States became embroiled in this divisive conflict.  It is about a boy and his father visiting the Memorial, looking for the name of the boy’s grandfather, a casualty of the Vietnam War.  (If you don’t have the book and would like to share it today, there are several readings of it available on YouTube, for example here.)

There is nothing in the book about the war, nor about the specific circumstances of the grandfather’s death. There is no description of heroism, although heroism is implicit in the monument.  Looking for the grandfather’s name among so many requires the boy and his father to “walk slowly, searching,” which is both literally true and a metaphor for processing the history behind the Wall. Similarly, the boy’s observation that “The wall is “black and shiny as a mirror,” points to their need to see themselves in this tribute to their grandfather’s life. (Caregivers reading this with children will choose how to explain that one veteran visiting the wall is a double amputee in a wheelchair.) The tributes which visitors have left, from teddy bears to a wilted rose with “a droopy head.” Other visitors are crying.

When the boy’s father finds his own father’s name, George Munoz, he makes a rubbing of it, capturing parts of other names as well.  When the boy points this out, his father responds, “Your grandpa won’t mind.” Each name is an individual, but their loss was collective as well. When a group of uniformed schoolgirls tours with their teacher, they are interested, but not personally involved. Their teacher correctly imparts the message to them that “The names are the names of the dead, but the wall is for all of us.” Yet their experience of the Wall is unlike that of the boy and his father. There is no moment of epiphany which compensates for this family’s loss. Yes, the Wall is a “a place of honor,” as his father tells him, trying to put his sadness in context, but the boy realizes that he would rather have his grandfather there with him.

There is no overt anger in this book. It is not the resource for explaining facts about why so many American soldiers lost their lives in Southeast Asia in a proxy conflict during the Cold War. Although the grandfather’s name is Hispanic, it does not introduce the fact that servicemen of color were disproportionate among the casualties, largely due to socioeconomic inequality, including access to student deferments from the draft.  The Wall is a book to honor those who served and to validate children’s feelings of loss, or less directly, to encourage empathy for those who suffered most directly.  Memorial Day is about never forgetting.