Lucy Crisp and the Vanishing House – written, and with illustrations by, Janet Hill, Tundra Books, 2020 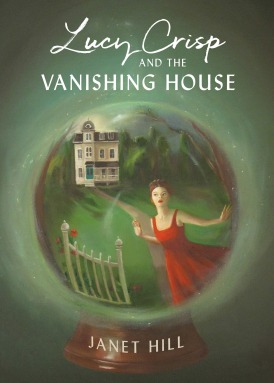 Lucy Crisp is just a sharp and creative young woman with a few loose ends to tie together. She is living in New York City with her restaurant critic father and doing temp work at a florist shop, but her future is unsure.  When her employer suggests she look into a floristry program at the intriguingly named upstate educational institution, Ladywyck Lodge, it seems like a good solution to her aimless second gap year. As it turns out, the town of Esther Wren, where Ladywyck Lodge is located, is a cauldron of supernatural activity.  Lucy moves into her new house and soon is confronted with some unsettling and unexplained phenomena. The book is a mystery, an exploration of character, a bit philosophical, and frequently funny.  Paired with Janet Hill’s inimitable illustrations, readers are immersed in a world where the difference between an enchantment and a haunting becomes quite significant.

Janet Hill’s literary and artistic styles (reviewed previously here and here) are a striking combination of ingredients: Oscar Wilde meets Agatha Christie plus the Pre-Raphaelites and Maira Kalman.  The novel is not a parody and its careful resolution is not the mere solution of a puzzle.  Lucy is a believable person with whom readers will identify.  Who hasn’t overlooked obvious pitfalls in pursuit of a goal?  Her intensely visual imagination finds its counterpart in Hill’s lovely prose: “Putting her wretched brownies on display would not only be an embarrassment to her but would also be an insult to all the other desserts on the table, including the really old date cake.”  Some of her phrases are elegant shorthand for the universe, such as one character’s disquisition on the differences between coffee and tea: “Scarlett explained that most Goodies disliked coffee, but the Baddies appreciated it – so much so that some believed it actually enhanced their abilities.” That makes sense, doesn’t it? 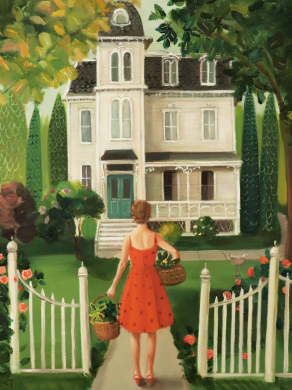 Lucy’s quest for independence from her father is also present throughout the book.  He is always there to bail her out, with his practical skepticism and his calming explanations, but Lucy needs to work things out for herself.  She also needs to negotiate relationships with her peers, with other adult authority figures, and with the inevitable crush who may not actually be what he seems.  Lucy is persistent in her path towards both discovering the source of her house’s strange events, and in discovering what it is she actually wants to do with her life.

It is not easy to construct a novel with illustrations.  It not a picture book, yet the pictures must still advance the story and not serve just as decorations.  Lucy’s quirky fashion sense, her house’s inner and outer instability and the mysterious teenagers, who hover on the lawn exuding a feeling of potential evil, all give the reader an evocative picture of this mysterious world.  Lucy seated at her desk, her back to the reader, is a serious and dedicated working girl, any young professional intent upon her career, while her white dressed neighbors are a vision of adolescence gone awry.

Lucy’s brave ascent towards the Victorian house, which will be the site of so much mayhem, could be a brave heroine in a nineteenth century novel,while the armchair covered in a bunny pattern is one piece of evidence that something strange is happening.  The nostalgia-laden snow globe scene is Hill at her best, alluding to tradition but personalizing it, as the tiny sunglasses of the station wagon’s passenger look towards the reader, not knowing what to expect.  Hill has translated that visual sense of the uncanny into Lucy Crisp’s adventure.